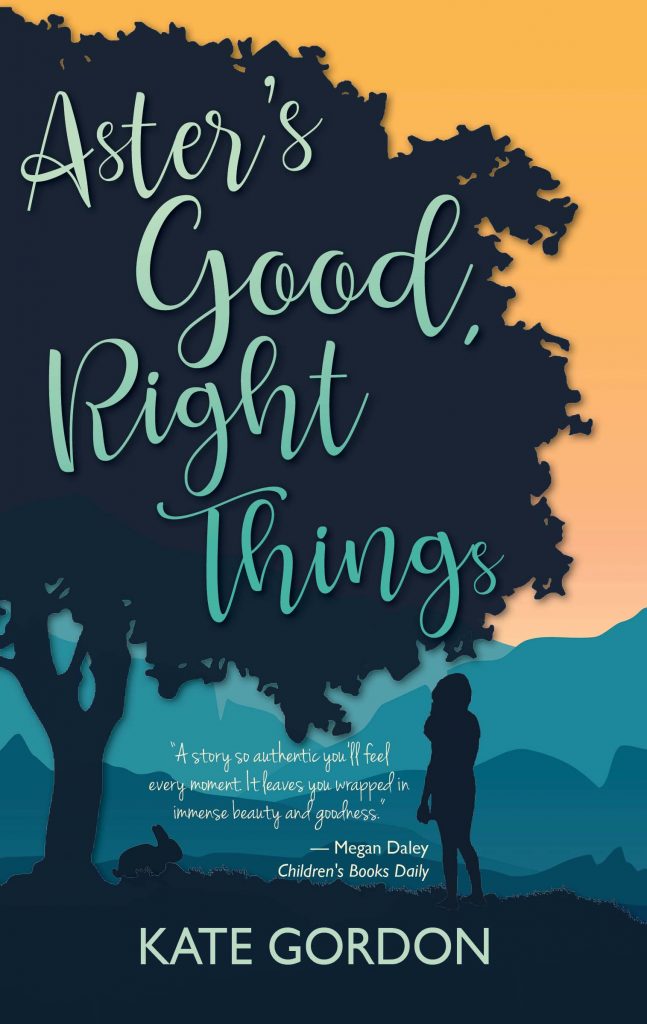 Kate Gordon creates characters that you can identify with, no matter how old you are. Her writing is insightful, moving and beautiful. She can suffuse even the darkest moments with humour and build lyrical worlds that draw you into their centre, as you walk alongside the characters.

Aster’s Good, Right Things, was the winner of the Children’s Book Council of Australia Award 2021 in the Younger Readers Category. A middle-grade novel for all ages, it tells the story of eleven-year-old Aster, who attends a school for gifted kids. Aster doesn’t think she’s ‘special’ at all and believes that if she was, her mother wouldn’t have left. Each day, she feels that she must do a ‘good, right thing’—a challenge she sets herself, with the goal of making someone else’s life better. She cannot share these ‘things’ with anyone, because then they won’t count. And if she doesn’t do them, she’s sure everything will go wrong. Until she meets Xavier, who has his own kind of special missions to make life better. When they do these missions together, Aster feels free, but, she wonders, if she stops doing her good, right things will everything fall apart?

‘I can’t let go of them – the good, right things—because if I do I’ll turn into a cloud and I’ll float away, and a storm will come and blow me to nothing.’

Written with a lightness of touch and just the right amount of wonderment, Aster’s voice is clear and strong and it’s easy to step into her shoes and understand the world from her perspective. The issue of a parent leaving a family, where the child believes they have left them, rather than the marriage or simply having a desire to seek something in their own lives, is well-handled, and Aster comes to understand the truth about this. The ‘good, right things’ she believes she must do each day, are given as gifts to others, as a way for her to make up for the fact that her mother left when she was small – something she thinks was her fault.

Aster uses flowers as a tool for representing emotion, such as Heather, which signifies solitude and Delphinium blossom which means goodwill and joy and an open heart, gifting these to people to make connections. As she travels through the story, Aster begins to believe in herself and she starts to rely less and less on her need to make sacrifices for others. This process begins after she meets Xavier, a boy who she discovers hanging around the school; a boy who is visited by The Black Dog.

Aster is also troubled by a girl called Indigo, who bullies her. She believes Indigo hates her, but gradually, as Aster starts to see the world and herself differently, a friendship begins to blossom. Along with the more difficult emotions of the story, there is plenty of gentle humour, allowing a resting place for the reader. The adult characters are just as well written and as present in the story, but they do not dominate the three main young people’s stories as they learn to manage their emotions and their relationships with each other and the world.

This is a lovely story that engages readers in issues around mental health, self-esteem, frienship, family and belonging, which is perfect for ages 10+ and would appeal to older middle-grade readers as well as teenagers, and adults.