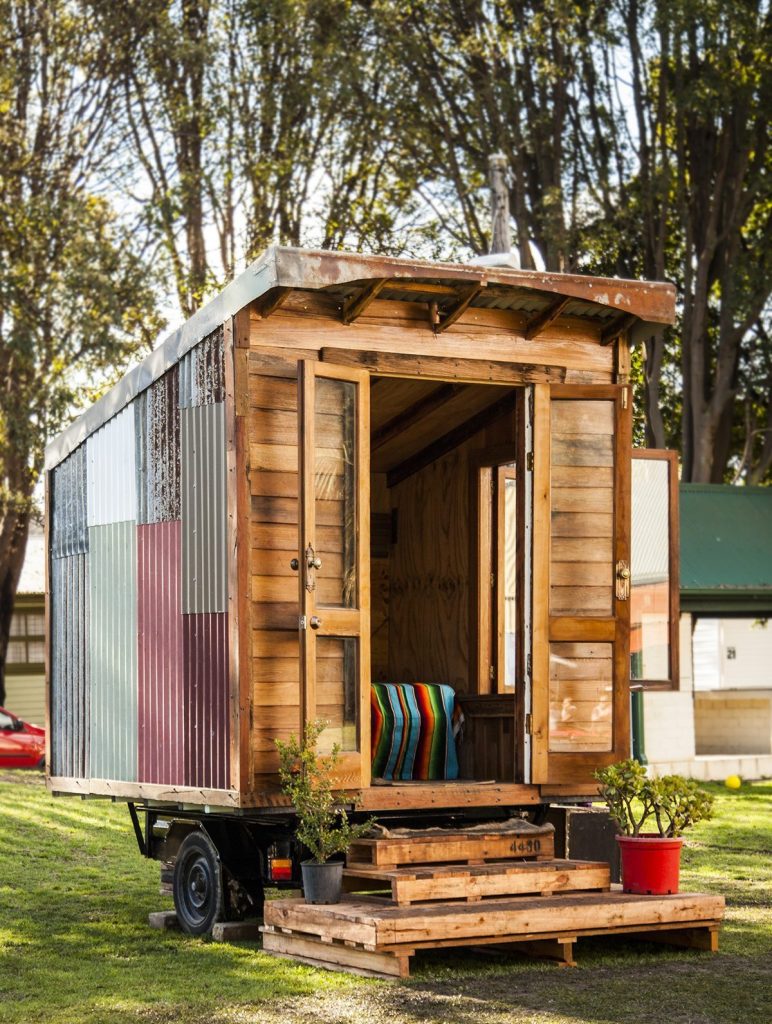 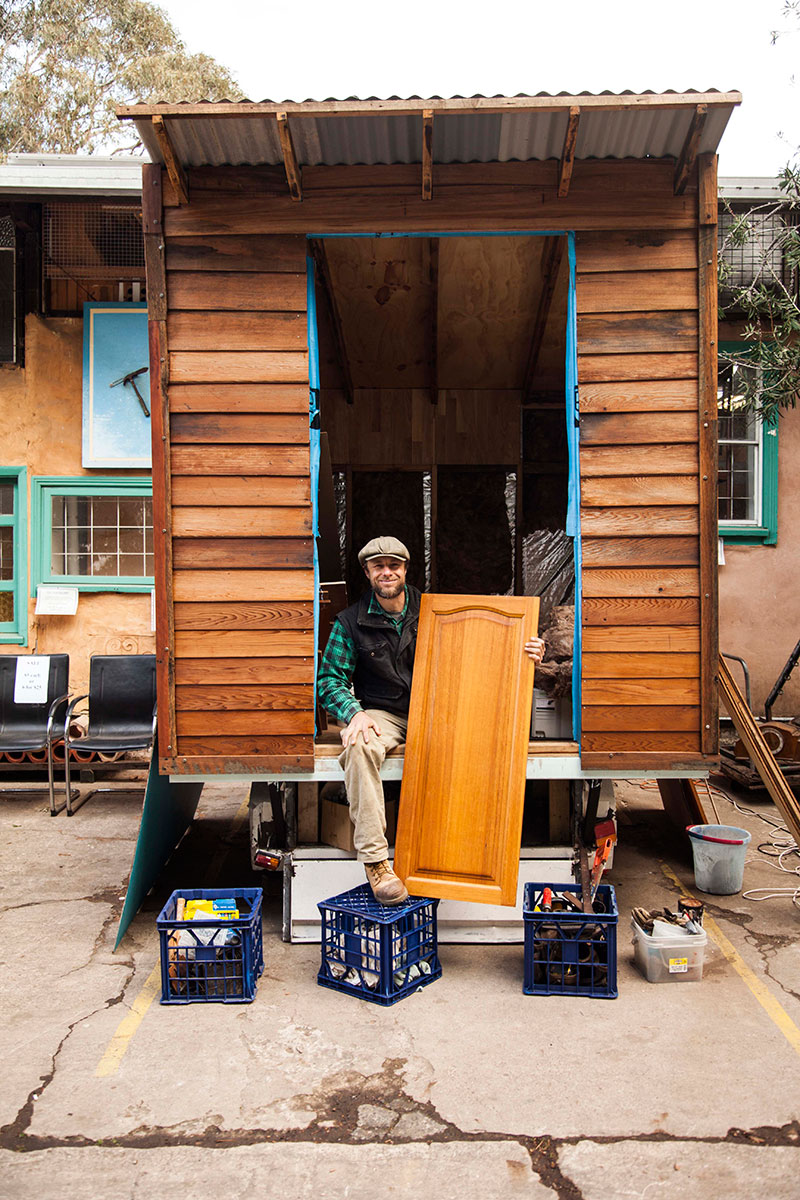 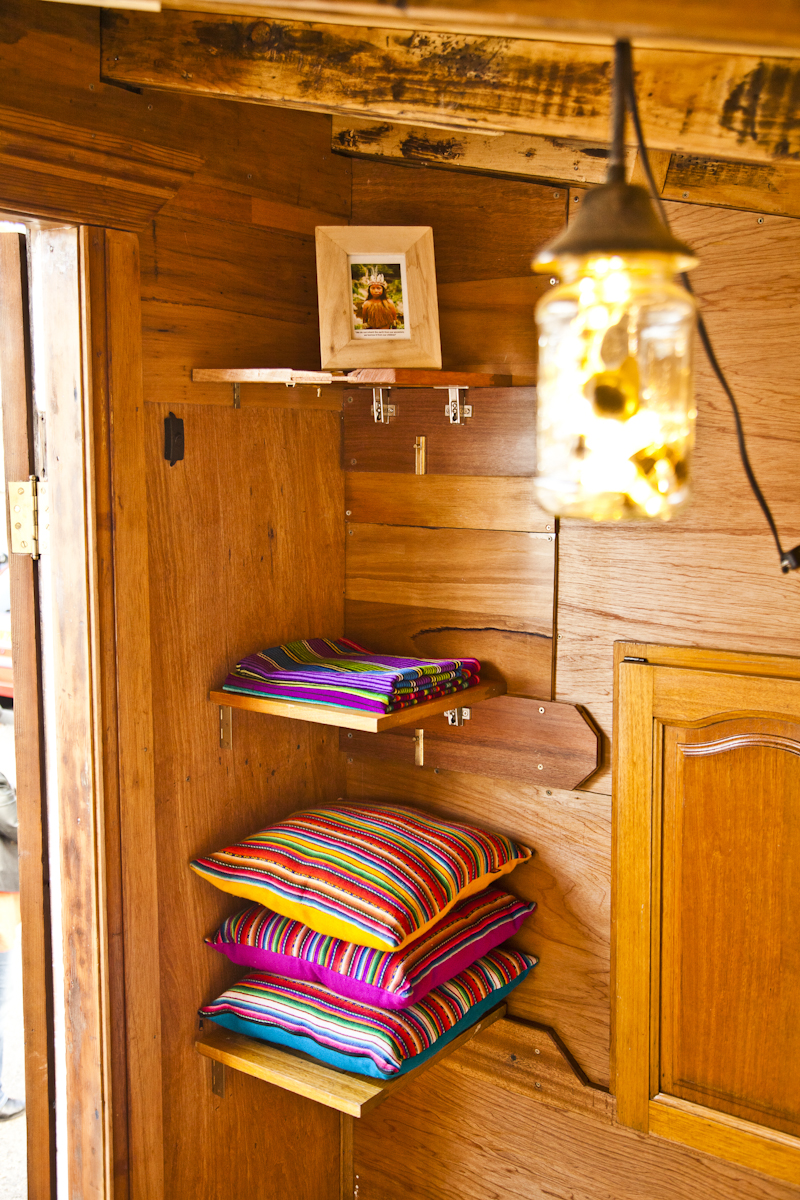 I posted this story a while back, but have refreshed it because so many people are getting interested in tiny houses! James The Upcyclist builds all sorts of things with recycled materials. This project is the Tiny House prototype, in conjunction with The Bower Reuse and Repair Centre in Marrickville, Sydney, made mostly from recycled materials in 2014.

You can take a tour of James and Alicia’s own beautiful tiny house in my sustainable living book available here.

The tiny house movement is a social and architectural movement that advocates simple living in small spaces. Although well established in the USA, the idea has begun to gain momentum in Australia. Many people see tiny house living as an antidote to the increasingly high cost of housing and the culture of consumerism. While small homes are nothing new, the movement has created an architecture and community all of its own. 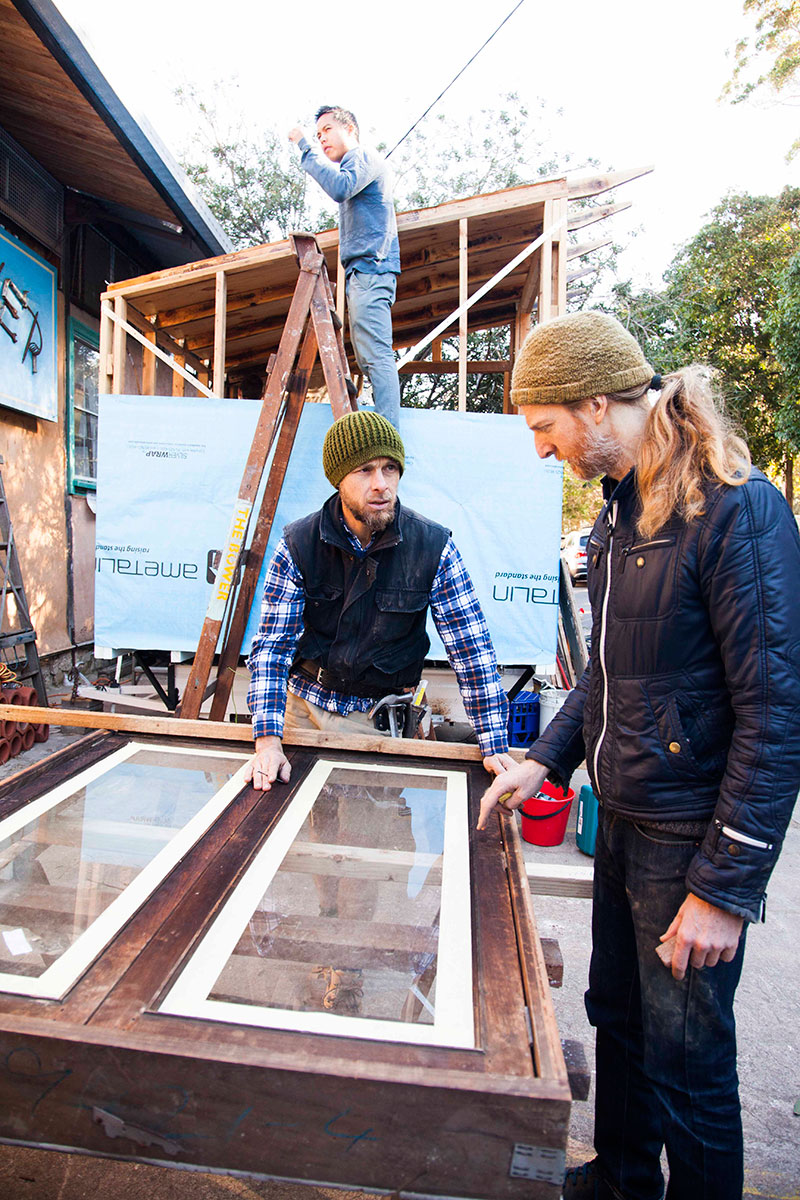 James was able to use upwards of 95% recycled materials which came mainly from The Bower, as well as donations from Tiny House supporters, curbside finds and other salvage yards. The materials range from fence palings as exterior trimming, to Tasmanian Oak cupboard doors which were upcycled into the desk and shelving. The small deck is made from pallets and the Western Red Cedar doors and window were treasured finds at The Bower. 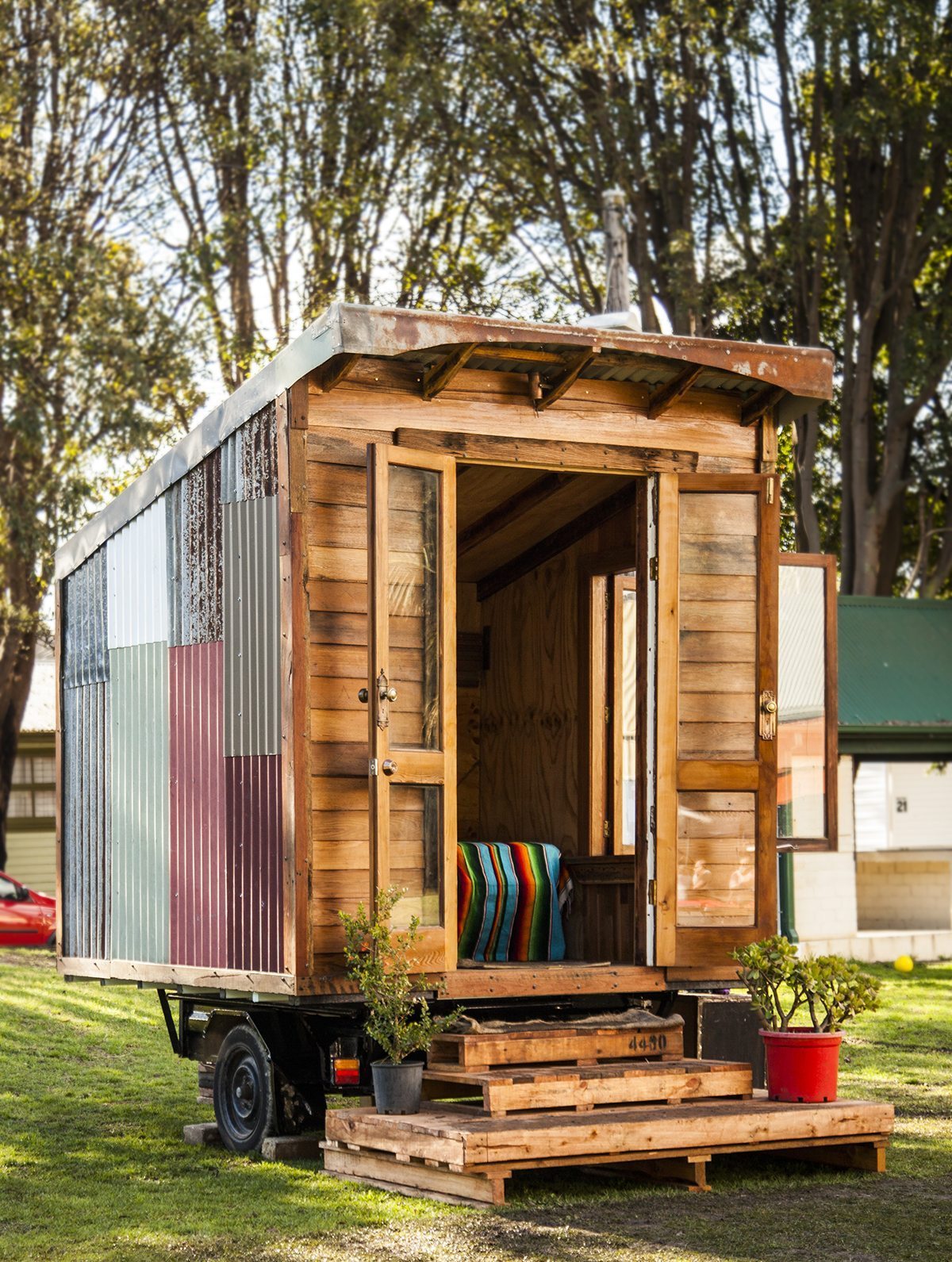 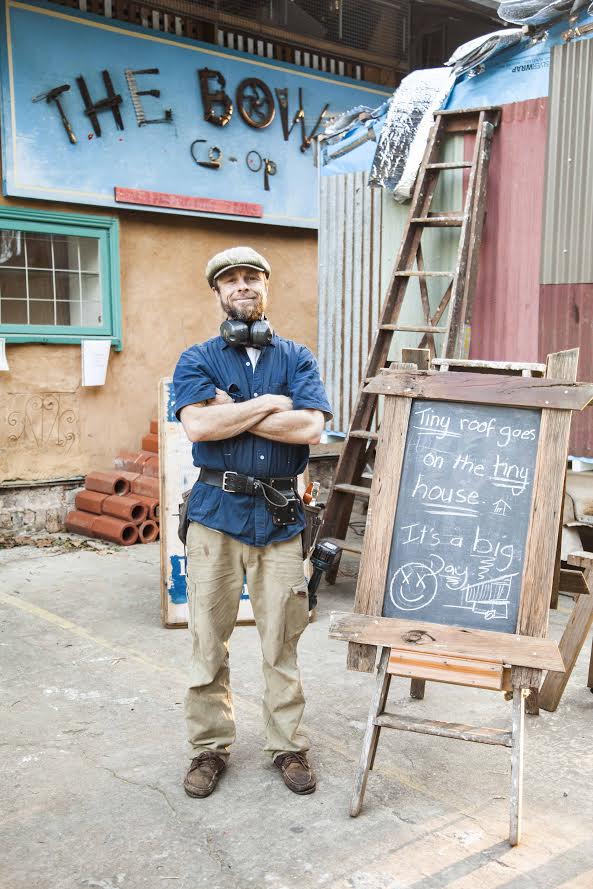 The “Tiny” was auctioned to coincide with The Bower’s 15th Anniversary Celebrations with proceeds from the sale split between The Bower and The Upcyclist. James used his share to fund the start-up of a business building tiny houses from recycled materials.

James is passionate about building in the most sustainable way possible. Formerly an Environmental Scientist, he applies his love for the environment to his carpentry work, by building with salvaged materials. He takes great pride in creating beautiful and practical objects without depleting the earth’s resources.

The Bower takes hard waste heading to landfill and makes these items available to the public for reuse. They work to raise awareness of the value of waste reduction and advocate for long life design, repairable products and the use of sustainable, recyclable materials for appliances and furnishings.

In order to keep it simple, the team didn’t tackle building a complete tiny house for this first project. They designed a single person living space, minus a kitchen and bathroom. It’s essentially a backyard studio. The initial design idea was to create an extra living space for a family who had outgrown their existing home.

As the building took shape a number of people expressed interest in using the space as an artist retreat, a home office or even a boutique Airbnb listing. It incorporates a single bed which folds into the rear wall, a desk and some nifty storage options. The Bower’s signature recycled timber boxes were included in the house, serving as both storage and seating. LED Lighting is powered by second hand car batteries and a solar panel. There is also one 240V power point, which acts as a charge station for a laptop.

The house sits on a box trailer, which means it can be considered a temporary structure and doesn’t require council approval.  It is fully insulated and water tight. The build took about 2 months, with James working 4-5 days a week with volunteer help.  A working bee was held early on, which was both an information day for other tiny house enthusiasts, and a chance to get some extra work done, like sanding and varnishing the beautiful window, and prepping wood for the roof.

As James was working with salvaged materials rather than standard sized materials from the hardware store, it took longer than it otherwise may have.  He held off on certain parts of the build, waiting for the right materials to be available – and they always were, eventually.  But he says that made it a much more creative and rewarding process.

There are now numerous businesses able to work with you to build a tiny house. You can search for these online in your local area, across Australia.