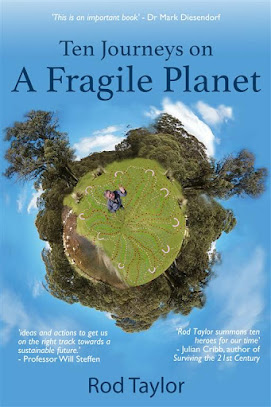 Rod Taylor says the world is a fascinating, complicated, sometimes bright, sometimes frightening place. It’s all of these things that lead him to write; the stories and the ideas.

‘When someone reads your words, you are for a moment, connected. Your thoughts enter their world for a time and, if they resonate, they stay with them.’

‘Are your beliefs valid, do they stand up to rigorous examination? Explaining them to someone else requires explaining them to yourself. Writing is difficult. Never believe a person who says it’s easy. Forming thoughts into words is a complex intellectual puzzle with many solutions. I love it.’

Rod believes we are entering ‘dark and dangerous times,’ and that those of us who are alive now are the only people who can change that. He wants to share the stories of people who have a vision and are doing something about it.

Rod’s first newspaper story was published around 2007 and he has published a weekly science column for Fairfax / Aus Community Media for 11 years. One of these was featured in The Best Australian Science Writing. He is currently co-editing a compilation of major writers on the Green New Deal, featuring A-list writers such as Will Steffen and Michael Kirby.

‘I’ve written for magazines such as The Big Issue and various motorcycling publications. While they’re a bit different to my science columns, always it’s the story. The story is the thing. Even before I was published I was writing a blog. One of those stories we broadcast on ABC Radio.’

Rod says he is an optimist, but it’s becoming increasingly clear that we are ‘perilously close to disaster.’ He has co-edited a significant book that looks in depth at sustainability and says, it’s a different market but with A-list writers. Following on from that he is co-writing a popular market book that covers many of the same themes, called Civilisation 2.0.

‘Whatever so-called ‘sustainability’ is, it looks nothing like what we are doing now.
In my own tiny, sub atomic way, I’m trying to avert that.’

Rod wants to see a radical change in the way we perceive ourselves and our planet.

‘Right now, we’re operating on the assumption that infinite growth is both desirable and possible.’

He is contemplating a book about the end of science. It’s a huge and complicated topic, so he is hesitant, but says that almost nobody has touched this topic and the field is right open. In the future he plans to ride his bike, spend time with family and friends, and hopes to see his kids and their kids, thrive. Finally, he wants to go back to that childhood memory, to sit in the sun and contemplate.

You can find out more about Rod’s book – Ten Journeys on a Fragile Planet, here.