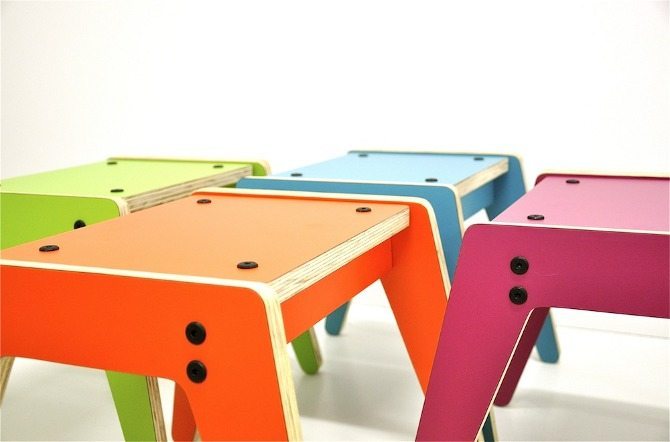 LAB DE STU is a multi award-winning cutting edge independent Melbourne design collective. Adam Lynch, Dale Hardiman and Andre Hnatojko, the designers behind LAB DE STU will be showcasing their work at the upcoming Decoration and Design  in Melbourne from 18 – 21 July. They created LAB DE STU as a way to showcase their work and promote themselves and their design work. Today, they say, it is a design showcase,” a mode in which we expose our creations in a collective scenario under a uniform banner.”

They have won numerous awards including Inside out Mag / Temple&Webster – Emerging designer of the year award finalist – Andre Hnatojko in 2013,  VIVID commercial award: Andre Hnatojko’s ‘Popper’ Light in 2012,  A Designer A Day (Special Mention) – Design Hub/ Department INDACO The Polytechnic Of Milan: Dale Hardiman’s ‘Klag’,  The Green Inventors: Dale Hardiman’s ‘Kid’s Straw Stool’ and in 2011, Fringe Furniture Sustainable and Waste-Wise Design: Andre Hnatojko and Dale Hardiman’s ‘AIR’ Light. Check out more about them and their work on their website

I will most definitely be checking our their work at Decoration and Design in a couple of weeks!

Flat-Pack with a difference!  Mr. Dowel Jones (above) has simple assembly with spread legs which allow for a greater area of space on a desk-top. Made from rubber and Tasmanian Oak, the designers explain that the rubber components allow for flexibility in all dimensions, as different sized dowel can be used to change the overall proportions. All rubber componentry is manufactured in Melbourne through Abar Rubber, who were closely consulted throughout the manufacturing process. It is very, very cool and very contemporary.

Squat by Adam Lynch is based around simplistic construction principles. Available either flat packed or assembled, Squat is a range of natural birch ply furniture that is available in either a bee’s wax finish, or with laminate faced radiate ply with bee’s waxed edges (specific colours are available by special order). Squat has been specifically designed to nest perfectly across a ply-board which cuts back on all material waste and further manufacturing processes. These are just gorgeous.

The designer of Popper, Andre Hnatojko, says he loves to experiment with different methods of creation, with one his favorites being that the “design ‘designs’ itself – with the designer being only the conductor”. He explains that he first created this form via inspiration of the shock and surprise of party poppers, which then later incorporated the use of being a pendant. From this, commercial applications were researched and chosen depending what design needed. (aka the recycled aluminum and BIO finish).

All sustainable elements placed within Hnatojko’s work are there from his belief that “all good design should incorporate sustainability as a minimum standard, not as a fashionable and expensive selling point only available to the privileged”. More than just creating a a great look, the finish of the POPPER light is actually a specifically chosen BIO finish which will not effect the re-recycling of the extremely light spun recycled aluminum metal shade. I like that a lot.