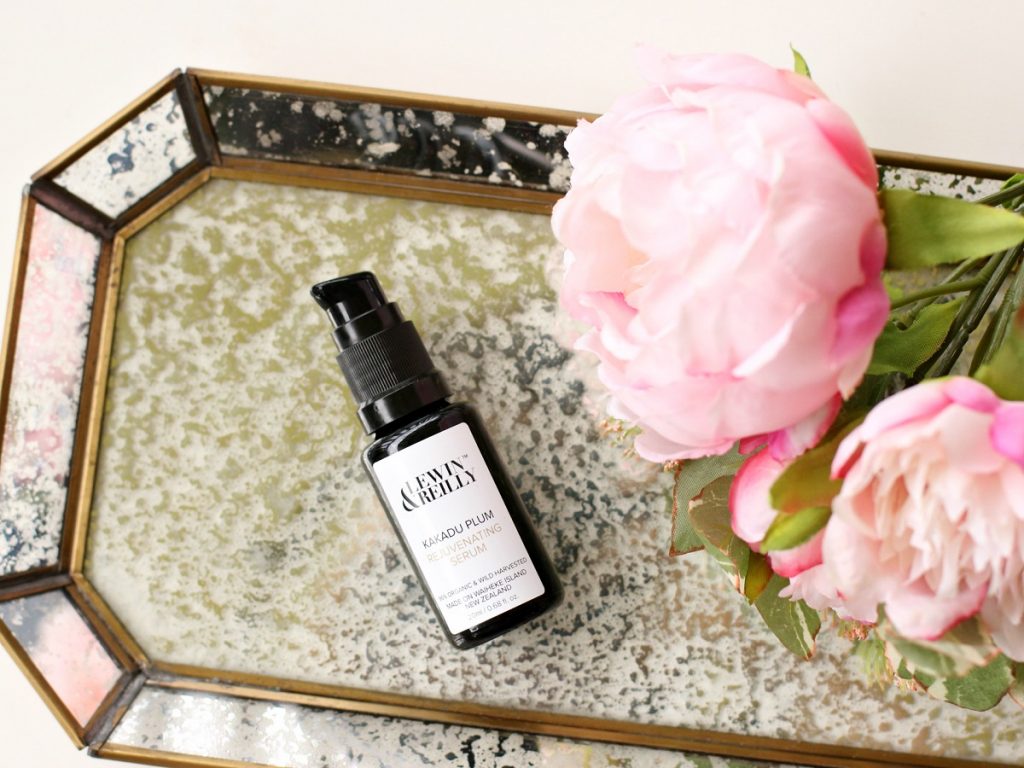 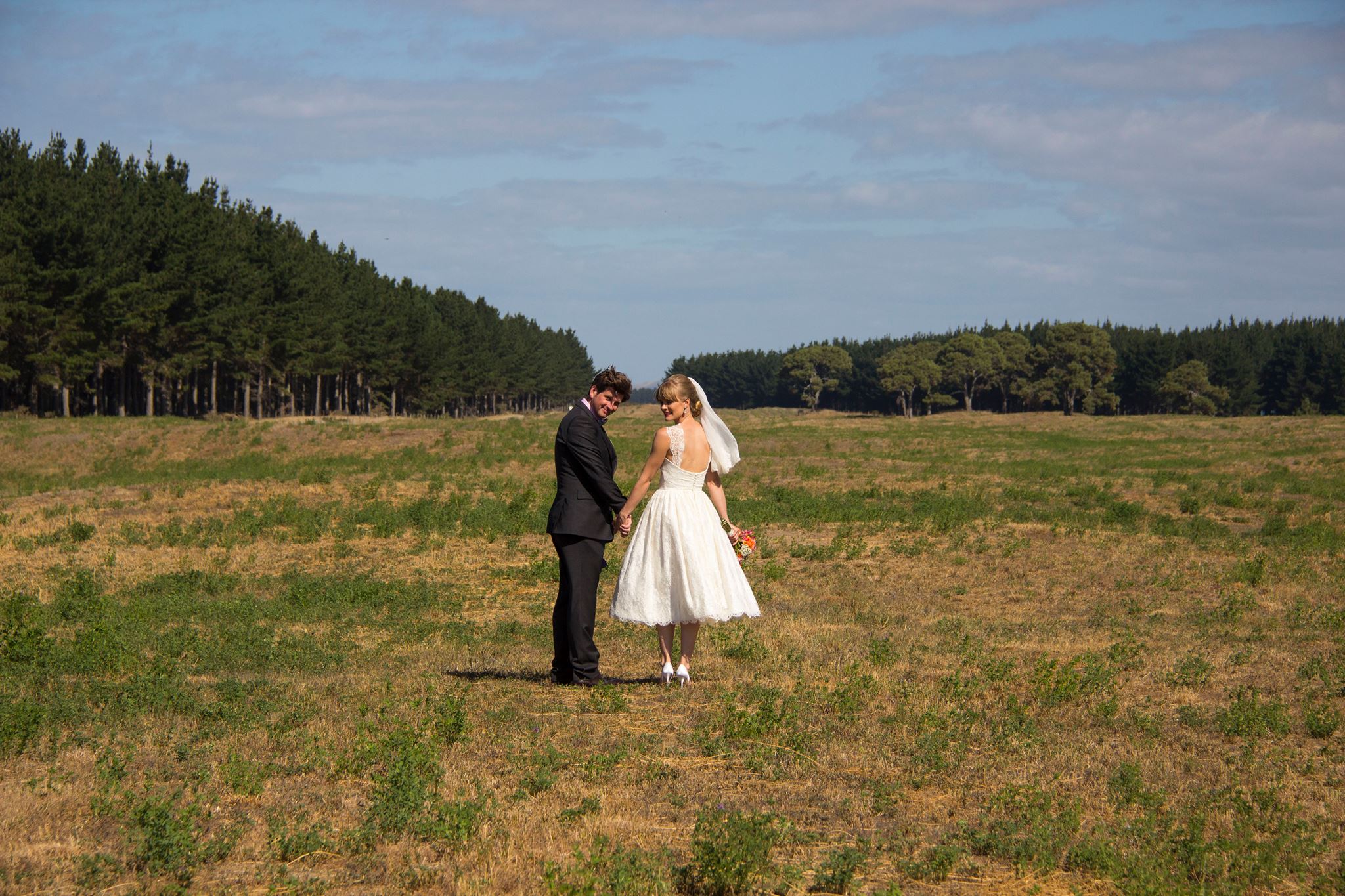 The world is so much smaller now we have the Internet. Friendships are forged all over the world, for all sorts of reasons. I came across Kim Lewin-Reilly and Andi Reilly, from Lewin & Reilly Organic Skin Care, after they bought one of our beautiful fair trade rugs. It was during our conversations about this, that I asked about their skin care. Being from New Zealand, I was even more keen to connect because it is one of my favourite places on earth.

This ended in us swapping our wares, with me buying some of their range, and the couple bringing our rug into their home. Lewin & Reilly is an Organic Skin Care company who sources raw, native organic and wild harvested ingredients exclusively from farms in Australia, New Zealand and the islands of the South Pacific. Having very sensitive skin and trying a number of these beautiful products, I am very impressed and am sharing their story. 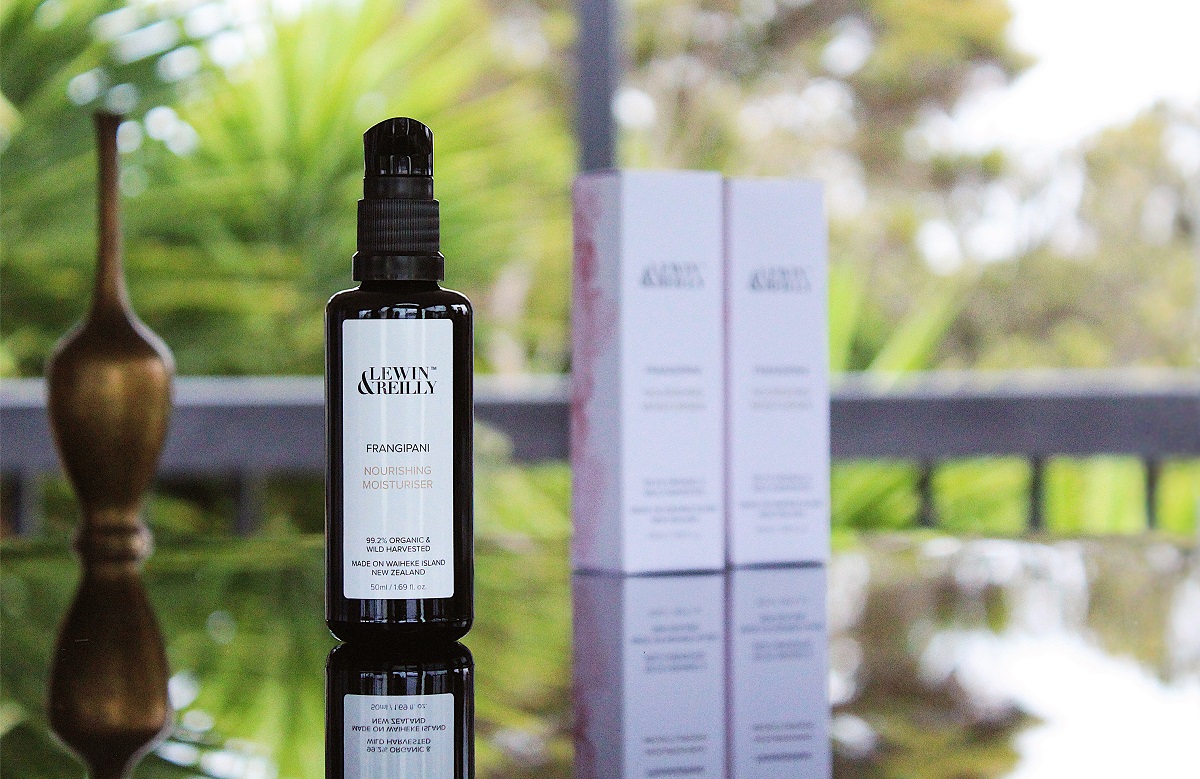 Lewin & Reilly operate on a minimum 95% certified organic, organically grown (but not certified), wild harvested and bio-dynamically grown ingredients sourced from their part of the world to minimise air miles, hence adding to the freshness. Their packaging is fully recyclable and mostly made in New Zealand, with the exception of the exquisite Miron Violetglass bottles which are made in The Netherlands. Miron Violetglass is exceptional in protecting precious concoctions because it only lets in the beneficial spectrum of sunlight, essentially keeping the rare ingredients fresher and more potent. They also use minimal plastics for their packaging, and re-use packaging sent to them by their suppliers when they ship to wholesale clients and online customers.

Celebrating their third year in business in December 2017, the couple started out in Melbourne after a life-changing honeymoon on the beautiful island of Aitutaki in the Cook Islands. A husband and wife team, Kim is from England and is a former ballet and musical theatre dancer and teacher. “Having travelled the world as a dancer since graduating from performing arts college in England, I met my husband (and now business partner) Andi while working on cruise ships together. Andi was a wine maker, working on the ship as sommelier (wine expert) and is originally from Gisborne, New Zealand,” explains Kim.

She immigrated to New Zealand to be with Andi and they lived in Auckland together for six months. For five years after that they lived on Waiheke island where Kim taught ballet and musical theatre dance. “I eventually took an internship for beauty editors at Cleo and MiNDFOOD magazines during my BA in communications. Andi managed Cable Bay Vineyards – a stunning restaurant, vineyard and winery nested on the headland looking over the ocean out towards Auckland. We decided we needed a change (though we still ask ourselves “why?’) and moved to Melbourne to further our careers.” she says.

During this time in Melbourne, the couple got married and went on honeymoon to an other-worldly island called Aitutaki in the Cook Islands. “We honestly had never felt so genuinely happy and vitally alive. The produce there was amazing as you might expect – everything grows abundantly and is naturally organic as there is no need to spray crops. The lovely little place we stayed at had a wonderful fruit and veggie garden full of mangoes, coconuts, starfruit, pawpaw, noni, breadfruit, bananas and more, and all over the island the people were so incredibly lovely and genuinely warm. In a funny sort of way, it was like stepping back in time to 1950’s New Zealand where the pace of life is slower, people are happier, less irate and take the time to get to know each other in a more thoughtful way.” says Kim.

The experience was not ‘touristy’ or commercial in any way, which she says was really refreshing. “We honestly didn’t want to leave and came up with the idea that if we could develop a coconut oil production facility with the help and skills of the locals that maybe we could stay there forever,” she remembers.
Once they returned to Melbourne, they quickly realised that was not going to happen, but became a little fixated with coconut oil! One thing led to another; they bought some more ingredients and began experimenting with making balms and soaps which they say are relatively easy to make.

This led Kim to put her research hat on – “I’m known as research girl in my family!” she says.  She scoured hundreds of pages on google to find farms and growers throughout Australia who were producing some utterly amazing native ingredients. “Australia has the largest organic land mass in the world, and given our experience on Aitutaki with all the naturally organic produce, wanting to contribute to the world in a positive way and having such easy access to organic produce now that we’d found these amazing suppliers, it was a no-brainer to go the organic route. So definitely Aitutaki inspired us, nature inspired us and organic farmers and their produce inspired us.” Kim says. 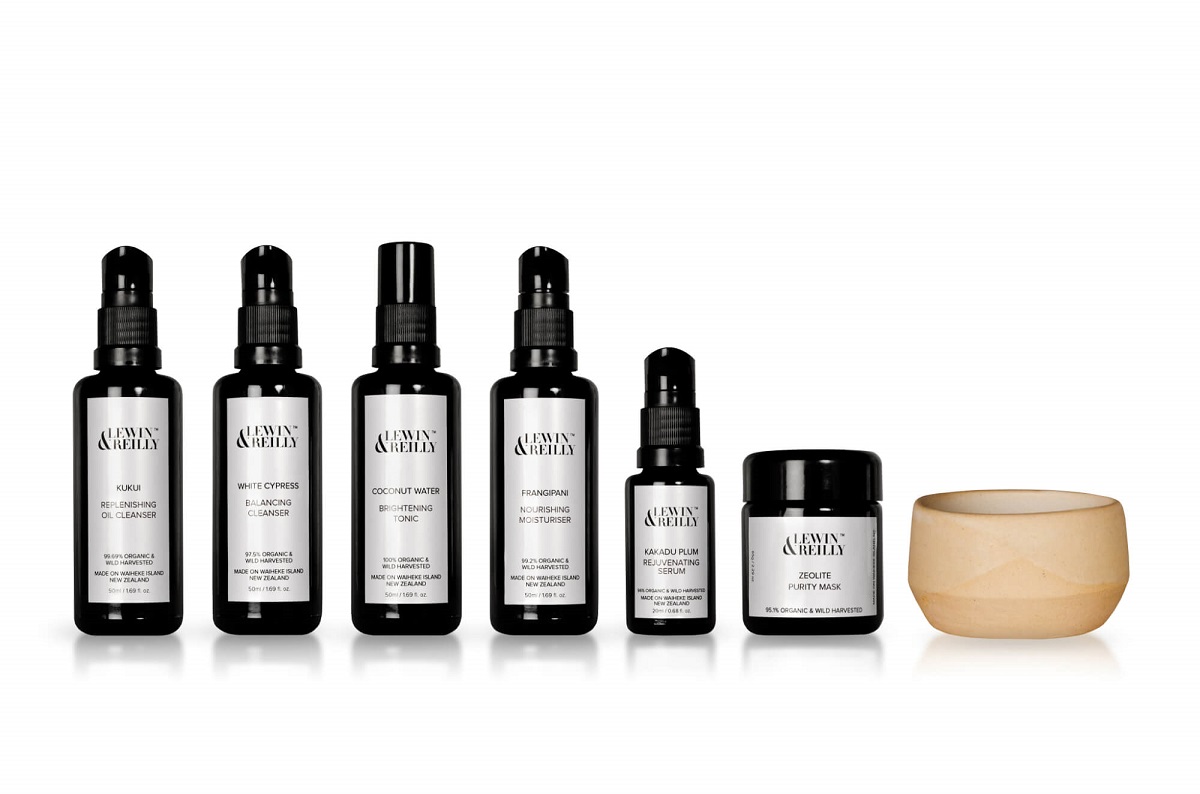 After this they ended up making over 150 test batches before they were happy with the initial collection, which consisted of 4 women’s facial products and 3 men’s facial products. During this time the couple both noticed improvement in their complexions and how much healthier they both looked and felt. “Before this, we were both definitely into using natural products and some organic products too, but nothing like we are now, and we certainly hadn’t experienced results like this before complexion-wise,” says Kim. Once they started sending products to their friends and family to trial and got great feedback, they knew they were onto something very special indeed. There were many tweaks along the way, but Kim says good things take time. Once  confident in their formulations, they started selling online and got such wonderful feedback it really solidified their love for Lewin & Reilly. That was when they really fell in love with the idea and its potential.

There were many, many, many failed experiments/formulations in between, but Kim believes you have to go through a lot of trial and error when developing anything worthwhile. She can get impatient at how long things take and can also get quite isolated working from home a lot on Lewin & Reillly, but says this is starting to get better as they expand in a big way this year. “As many a person has said in the past, starting a business is not easy – financially, time-wise and personally. There are lots of moments when things feel all too much and almost like no-one cares, but believing in yourself and that you have a great product that can help many people makes you and your business stronger,” says Kim. 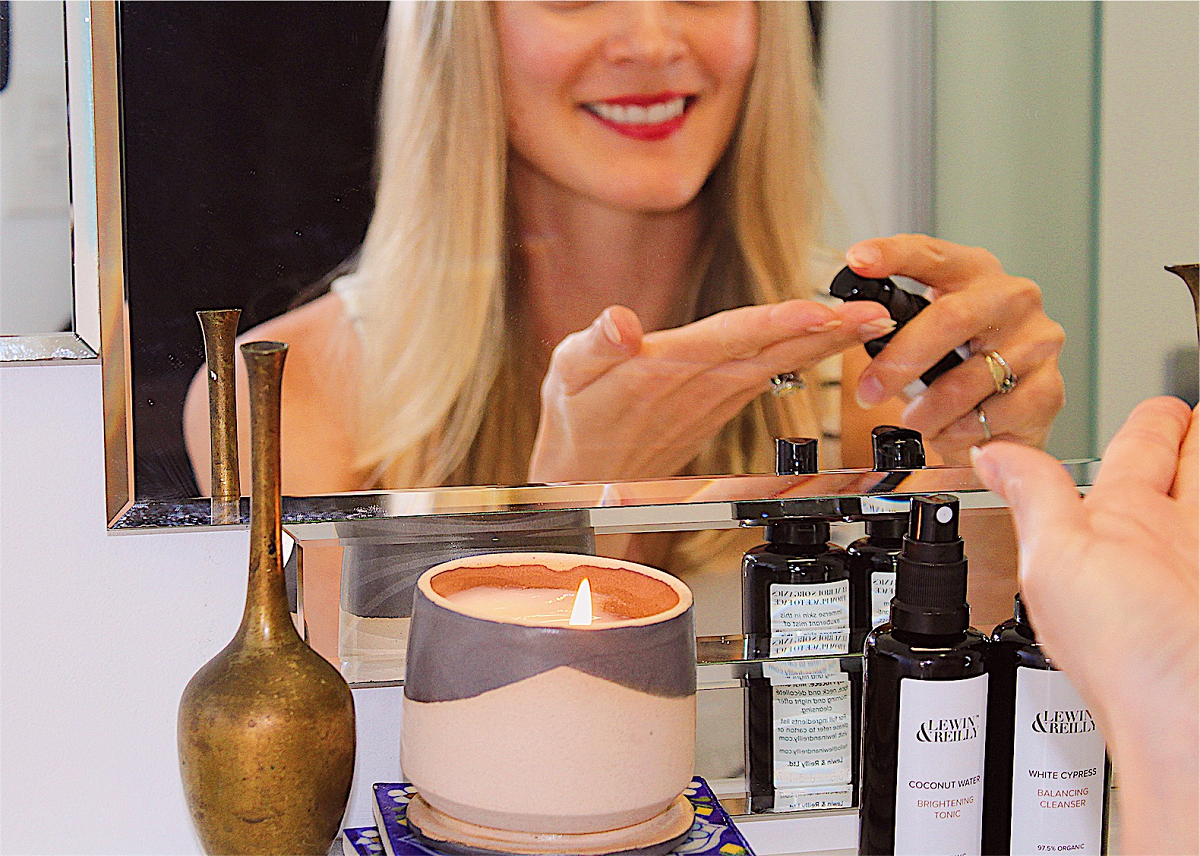 Sustainability means so much to Kim and Andi, as they have been trying for a baby for the past year, and thinking about what their children will be left to deal with environmentally makes it so much more urgent and personal.

“We’ve been pretty good in terms of doing things like recycling, composting food scraps, minimising what we put into landfill by making smarter choices when buying groceries, buying organic when possible, growing some of our own veggies and herbs which we plan to expand upon as the years progress, eating less meat and only ever free range, sometimes organic. Obviously cost is still a factor, but we do our best,” says Kim. Andi is also a keen furniture maker and sources a lot of wood from a recycled timber yard. They try to buy second hand Danish-style furniture because not only is it making good use of what already exists, but it is often made from better materials and the craftsmanship is better too – likewise with clothes and shoes to an extent.

With Lewin & Reilly, sourcing from organic producers close to where they make their collection ensures less air miles and has the bonus of making the ingredients fresher. Plus, supporting local Australian, New Zealand, Vanuatuan, Tahitian, Fijian, Samoan etc farmers means a lot to Kim and Andi, as they are helping to support smaller producers and more local economies, which in turn adds to a more stable global economic environment. “We certainly don’t just want to see big corporations getting bigger while small producers get smaller, so we’re also making sure we put our money where our mouths are,” explains Kim.

Another aspect of their home and business they are proud of is that they operate solely on tank water – “We are extremely careful how much water we use (though our tank is huge!),” says Kim. This means in the studio at home during the production of all of their organic skin care, they sterilise items with boiling water fresh from the tank, and for personal-use, re-use a lot of water – collecting from the shower and washing machine during Summer for the garden.

Kim’s tips on being more sustainable at home

Kim says they receive emails all the time from customers saying how beautiful their packaging is, how much they love the tropical and sometimes unfamiliar/unusual aromas of the collection. “We also get a lot of compliments on our website which is really lovely. Ultimately though, the best compliments are from customers who have had such great success using our organic facial products after years of trying so many others… they honestly can’t believe how good their complexions are now,” shares Kim.

Her favourite item from their collection due to its simplicity and potency is the Kakadu Plum Rejuvenating Serum. “It has the highest naturally occurring levels of vitamin C in the world and is incomparable in how it can change your complexion,” explains Kim. “Vitamin C stimulates collagen production which encourages healthier new skin cells to replenish themselves faster. This means your skin looks brighter, healthier, feels smoother and dewier,” she says. The Kakadu Plum extract is from a supplier who works directly with the Aboriginal Bardi people in the Kimberley region of WA, who wild harvest it. Kim says that this ensures even greater potency of vitamin compared to commercially grown Kakadu plum, because the plant essentially produces higher levels of vitamins C to protect itself from the harsh sun. The plant is in its natural environment, thriving under extreme conditions.

The couple are currently working on more organic products to add to the collection for the body and hair… watch this space! You can visit their website here
Helen