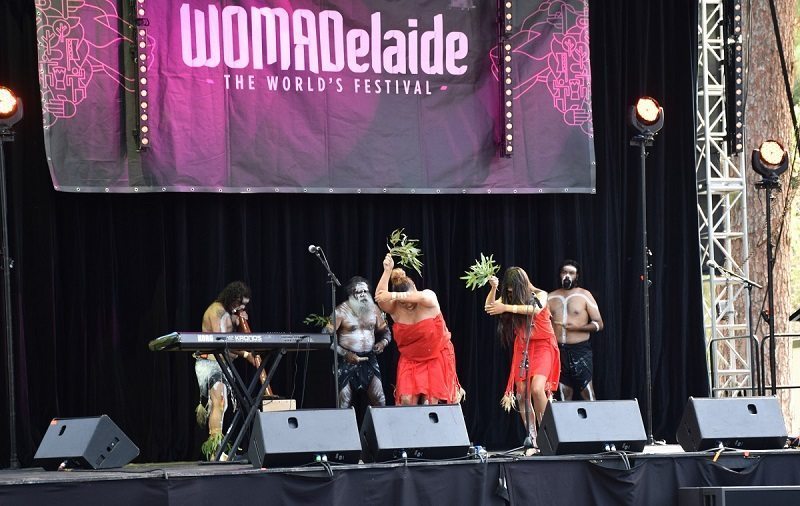 Well there are now no longer any more sleeps to WOMADelaide 2016, kicking off with a Welcome to Country by Kaurna Elder Steve Gadlabardi Goldsmith this morning at a very special opening event. Steve explained how we were on Kaurna land, alive with Red Kangaroo Dreaming.  He encouraged the spirit of the land to welcome us to this festival. We were also given a warm welcome from Director Ian Scobie, the South Australian Minister for the Arts, Jack Snelling, and the founder of the Hackett Foundation, the presenting sponsor of the festival, Simon Hackett, who all talked with excitement about the importance of thi festival which brings together cultures from all over the world in our beautiful botanic park. Even the resident flying foxes and the nearby monkeys at the Adelaide Zoo, joined in the chorus.

The crowd was treated to a very special and incredible short performance from Israel’s Ester Rada, a harmonica solo from the USA’s Wade Schuman from Hazmat Modine; and a roving performance from the UK’s Fair Play Comedy. The local bats were in full song too!
Ester Rada is the Middle East’s new soul diva, her cross-cultural sounds reflecting her Israeli born Ethiopian heritage. She mixes Ethio-Jazz, funk, soul and R&B with a vocal range like Aretha Franklin and strong influences from early 20th century soul power women such as Nina Simone and Ella Fitzgerald.

Also attending the media event were over 100 WOMADelaide artists and around 75 school children – it was a very special look into the start of the weekend festival. Having possibly their first insight into the sights and sounds of WOMADelaide and organised in collaboration with Children’s University, the children came from a range of Adelaide schools from across the greater Adelaide area. My children have all grown up at WOMADelaide and it is a very special part of our lives.
You can grab your tickets at the gate if you don’t have them yet – and find out more here   Gates open at 4.30 today and we will be getting our dancing shoes on so come join us. I also look forward to seeing a lot of local creatives during the weekend and sharing some of their wares with you.
Helen
x