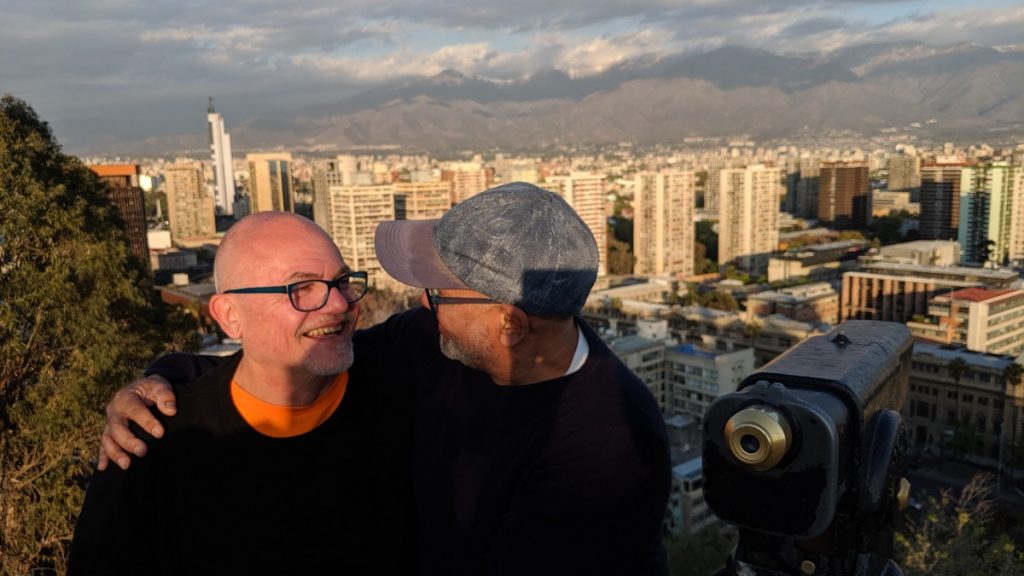 Author Kevin Klehr writes across a broad range of themes and genres, but says he recently realised that all of his books feature relationship issues. He draws on his own 31-year relationship, to create his fictional stories, and says Urban Fantasy and Magic Realism are the best ways to describe most of his work.

Kevin and his husband are blessed with a large circle of friends, who they’ve known for decades, so all of his main characters tend to either have strong friendships or are seeking these. Even Tayler, in Social Media Central, is lonely in the first chapter, because everyone in Astra City is addicted to their screens. He yearns for human contact and, ironically, finds it in a group of influencers.

Kevin has written a dystopian novel and is working on its sequel. Both are centred around social media.

‘Fortunately, many people have taken a step backward from social media since Covid, but when I wrote Social Media Central, I was very concerned about the way it divorced people from reality, and the way it disconnected us from issues we should’ve been paying attention to.’

He also delves into fantasy worlds, but says, not the sword wielding dragon slayers. Instead, he writes about more unusual, magical settings, such as the theatre district of the Afterlife in Drama Queens with Love Scenes a story about unrequited love, featuring an insecure angel and characters from different periods of time. Or an enchanted cruise liner with Alice In Wonderland style characters as a way to explore the escapism sought by a man in an abusive relationship.

Kevin likes to explore contemporary themes, using fantasy, because weaving these magical elements through a story is a more interesting way for him to tell the tales. His upcoming book, The Midnight Man, focusses on being middle aged, yet not being where you want to be in life. The main character, Stanley, hates his job, is in a failed relationship and has an overbearing mother. When he meets twenty-one-year-old Asher in his dreams, Stan is blessed with being a further five years younger each time they meet for their night-time adventures. Stanley relives aspects of his life and grows in the ways he should have up to this point.

Kevin says after he finishes a draft of a WIP, he puts it away for at least three months while he goes and works on the next draft of another. At this stage of revision, he usually has many written, typed and voice recorded notes.

‘I’ve learnt the best time to overthink a WIP is when you’re not working on it. After you re-read your previous draft, you will see which notes are relevant. There won’t be much. Only about twenty percent, but this twenty percent will be gold!

He says slowing down is also very important.

‘Over the last few years, I’ve had less time to write than before. But I’m okay with that now. I have a healthy back catalogue, a new book and two works in progress. What I will do is promote myself more. Get myself and my work out there. It’s something I’ve neglected in the past but it’s an important aspect of being an author today. Plus, I feel like it’s the right time to write less. It’s an instinct I have. I won’t stop writing altogether, but I want to reconnect with other hobbies and interests, and enjoy the simple pleasures.’

#AusWrites – When Rebecca Langham started #AusWrites on Twitter, Kevin suddenly found connections with other writers within Australia that he didn’t have before. ‘As we’re both with the same American publisher, the thing that naturally happens is all your social media becomes focussed on the US, and to a lesser extent, Europe, the UK and Canada. And yes, this is important, but social media algorithms make it harder to connect and be relevant in time zones that are not yours.’

Kevin now works on #AusWrites with Rebecca, and through it, he has discovered the Australian Speculative Fiction Group, which led him to publication of a short story in an Australian anthology and allowed him to sit on panels and run a workshop at Genrecon in Brisbane a few years ago, as well as being interviewed on the Australian Booklovers podcast. Kevin feels that online connection is one thing, but when it’s local, there’s more chance of playing author at real life events.

Having a publisher is important for Kevin. He knows authors who are self-published and sell more books with one release than he has with all of his works combined. ‘I’m impressed and a little envious. But I like the sense of security I have with a publisher interested in my work. It’s nice working with an editor, proof readers and a talented cover artist. And my LGBTQIA+ publisher helped me develop into the writer I am today. Even if I try something non-queer specific, NineStar Press will still be there for works that reflect my life.’

Wanting to develop as a writer is a key factor in sticking at his work. He was practicing reading his first novel out loud when his husband told him not to ‘use that novel’ for an upcoming author reading event, because it was not who he was now as a writer – that his writing has developed.

‘This is what makes all of the hard work worthwhile. My husband and I agree on which is my best work so far, and when I’m challenged to write something I’m not used to, like an action scene, I go online and study how to do that.’

Kevin wants each work to be better than the last. He often blogs about what he’s learned along the way, or how he’ll approach a writing problem. It is important to have a writer’s journey – to know you are not only writing in order to grow, but to know you are gaining an audience who are taking the journey with you.

In the future, Kevin hopes that authoritarianism becomes a passing phase.

‘Anyone who knows me personally, would expect one of my answers for this question to be political. So, here goes. I grew up in a time when the media held politicians to account and we lived in a society, not an economy. Many media organisations still try to keep politicians to account, but when most people believe their social media is a news source, they no longer see important news or when they do, have no context for it. It’s led to Australians voting as if they want their team to win, rather than looking at the track record of a political party or a leader, as they did in the past. And when journalists have their homes raided by the Federal Police just for doing their jobs, or there’s a media gag on reporting from refugee detention centres, it’s hard to hope for a return to a time when being ‘woke’ or a leftie was the default setting in Australia, and the generation that taught us those values might embrace them again.’

He also hopes for an end to covid. Please!

In a personal sense, he has had the feeling for a while that he and his husband are moving towards their next phase in life. ‘I don’t know what that means, though…we live in an apartment we bought in the late nineties. We have a great life. We have a circle of friends we’ve known for what feels like, forever. We also have wonderful neighbours in our block of flats. But when I think about the next few years, I don’t sense those neighbours or this apartment in the second half of this decade. I may be wrong. We may still be here. Yet. it’s a feeling I’ve had for a long time now, and that the next phase will be a comfortable transition.’

In terms of his work, Kevin would like to connect with more readers. Not long ago, a friend assumed he wrote erotica. It’s not the first time this has happened, and it won’t be the last. He internalised his disappointment, and calmly explained what he writes. Most of his audience is older women, so he knows who he is writing for. He hopes to grow that audience in the future.

While it’s nice to read a good review and know you’ve connected with a reader, Kevin feels that nothing compares to being live in front of book loving audience. At the moment, he regularly appears as part of the Rainbow Literary Society author reading and Q&A events. He was part of Genrecon a few years ago and has also been on literary panels for Queermance in Melbourne (which sadly no longer exists) and Saints and Sinners in New Orleans. He is hoping in the not-too-distant future, we will all be able to gather at live events once again.

You can find some of Kevin’s books at The Australian Bookish Shop and read all of his blog posts and more about his books at his website.