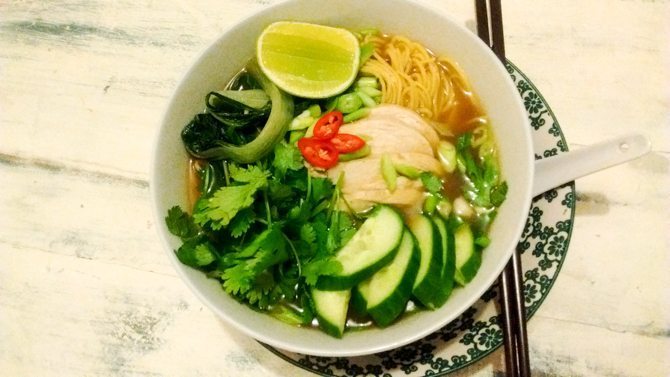 It feels like a lifetime ago that I last blogged, illness and injury decided to lay down on my couch, take over the remote and bring its mangey dog too. I was so sick and tired of feeling sick and tired, and watching my children – I say children, perhaps almost fully functioning non adults is more accurate- continuously get cold after cold and my daughter’s tonsillitis hanging around far too long.
So I decided a big steaming pot of Jewish Penicillin was called for. I didn’t want run of the mill chicken soup however, I wanted punch me in the face, sinus blasting, eye meltingly spicy germ busting soup. With greens. So I came up with this. It’s spectacularly easy, a little time consuming if making your own stock, which I hope you do as it just feels more nourishing, plus you can control the level of salt to your taste.
The fresh greens you use at the end are entirely up to you and what you and your family like, same goes for the type of noodle, whatever gets your motor running. I just happened to use the thin fresh egg noodles,mainly because they were the closest to the green grocers checkout and I did have Man Flu after all. Of course you don’t have to be sick to make this soup, its just delicious and lovely for warming the coldest nights, but light enough to be enjoyed in the warmer months too.

Place all ingredients in a stock pot and cover with water and allow to boil for 2 hours, removing lid after one hour and allowing the stock to reduce. Remove and discard chicken carcass and large vegetable pieces, they have done their job of releasing their flavour and goodness, and strain through a fine sieve. Place liquid back in pot or large saucepan and salt to your taste remembering that you will be adding seasonings like fish sauce later. Set aside until you are ready to eat.

Preparing to serve.
The idea of this next step is to reinforce the flavours of the stock while at the same time refreshing them. If you want less heat, don’t add the chilli at the reheating stage, just add to taste at the end.
2 long red chillis, one cut roughly and one thinly sliced
1 inch piece of ginger, sliced in to coins
1 stalk lemongrass bruised
One fresh chicken breast
Soy sauce, fish sauce and mirin to your taste, I guess I would have used about 1bs each of the soy and fish sauce and 3 of the mirin, but again, this is personal and do as you please with this step.
Place all the ingredients in with the stock and allow to simmer for ten minutes, or until chicken breast is cooked right through, after which, scoop out the chilli, ginger and lemograss and discard, place chicken breast aside to cool slightly, and taste soup for personal seasoning.

While simmering prep your greens. I used:
Half a bunch of spring onions, white/light green parts thinly sliced on the diagonal.
Bunch of coriander leaves roughly torn
Bok Choy
Cucumber
Place noodles and bok choy into stock and simmer until just slightly under cooked. It will continue to cook in the serving bowl. Arrange heated noodles in the bottom of the serving bowl, place sliced chicken breast, greens and herbs on top of noodles, and carefully ladle steaming hot soup on the top, finishing with fresh chilli to your taste.
Try this with fried or firm tofu instead of the chicken breast.
Slurp!!
Kellie xx