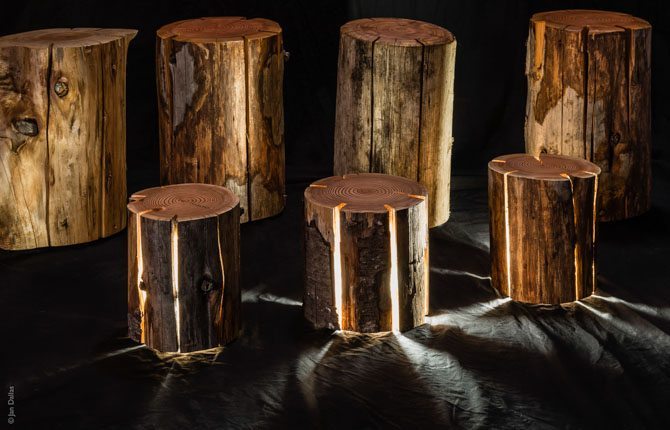 Tasmanian-based lighting and furniture designer Duncan Meerding had featured on Recycled Interiors before with his amazing Cracked Log and Stump Lamps.   He has been selected to participate in the Biennial Messe Frankfurt Light + Building Trade Show in March 2016 which is very exciting for this Tasmanian designer.

Having achieved widespread recognition within Australia over the past 6 years with his work featured on shows such as the ABC’s New Inventors and Channel 9’s The Block, Duncan has recently been catapulted onto the international stage. The past 2 years has seen his work short-listed for design awards in Europe and North America, including gaining second place at the Vancouver based LAMP award. He has also seen a significant increase in international sales. Duncan hopes that attending Messe Frankfurt, the largest lighting trade fair globally will expand the market for his unique products.

In order to realize this goal, Duncan has been awarded the highly competitive AMP Tomorrow Fund grant from a pool of over 2,300 applicants. This $1 million grants program supports Australians of all ages, abilities and interests who are doing great things to benefit the community.
Having lost his vision at age 18 to a genetic condition, with less than 5% sight remaining, Duncan’s work reflects the alternate sensory world in which he presides. Rather than hone in on intricate details, Duncan’s objects explore form, the relationship between light and shadow and the natural texture of the materials he uses. In short, Duncan’s designs give us insight into the way in which he experiences the world.
“The fact that my visual fields can influence my work in such a positive way is especially important. It is important to show that someone with severely impaired vision can succeed in the visual arts and more generally create a career for themselves.”
Duncan is determined to help break down the barriers in attitude regarding the capabilities of the legally blind in Australia and aims to lead by example. He is also passionate about the impact of his practice on the environment. Duncan’s designs centre on sustainability, with many of his materials salvaged from so-called waste product once destined to be burnt. Other objects are shaped from robust locally sourced faster-growing timbers, such as Tasmanian Eucalypt and Queensland Hoop Pine.

“The process of designing with the environment and longevity in mind should happen at the beginning of the design process rather than being tacked on at the end as an afterthought,” explains the 29 year old.
Duncan hopes that by expanding his customer base internationally, he will be able to further raise awareness about the importance of small-scale, ethically made products that are built to last. Some Items exhibited will include flat-packable Propeller Pendant Lights , the Spirals 180 Pendant lights and a selection of designs from his much coveted Cracked Log Light Range.