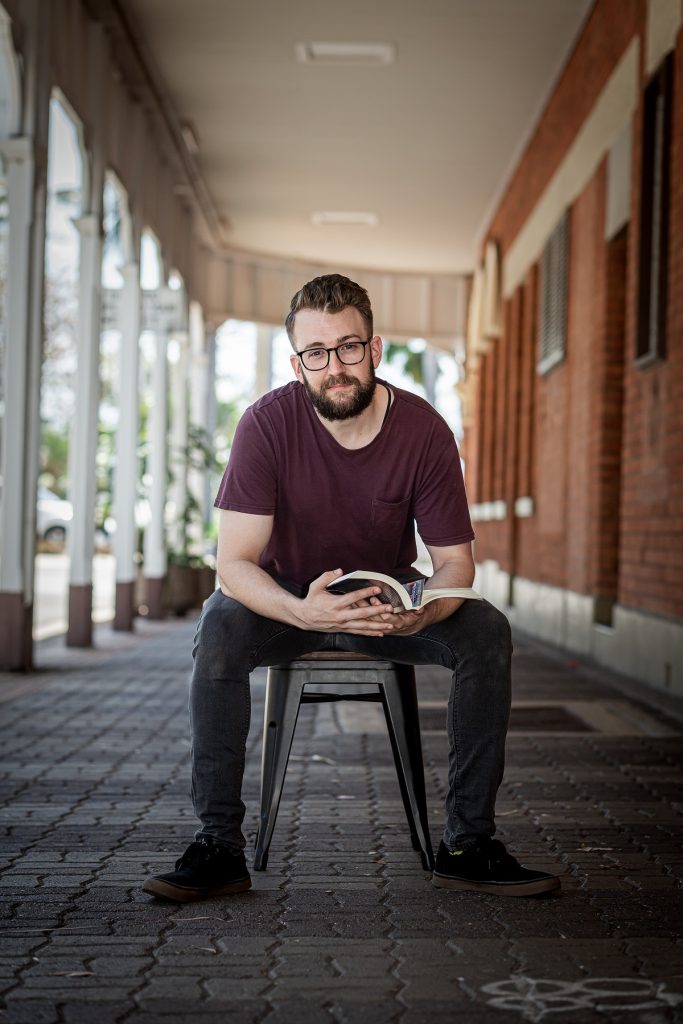 Benjamin Ryan writes ‘all things fantasy,’ and says that he has been nurtured by the genre since he was very young. He was given many fantasy books to read by his mum and aunties, and so, the genre he loves the most, became the genre he wanted to write. He is fascinated by the intricacies of folklore from around the world, particularly those of Irish and Gaelic origin.

‘I was given a book by an aunt and uncle when I was young, called Faeries, by Brian Froud and Alan Lee. Since then, I’ve always been fascinated by traditional faerie tales, their darker undertones and life lessons–it’s been a rich experience, especially later when I discovered Lady Jane Wild and her collection of Irish tales (I highly recommend anyone wishing to research Ireland’s folklore to peruse this masterpiece).’

Benjamin writes in third person narrative/past tense, because this has always made the most sense to him as a reader. He finds that past tense indicates something has happened already, and that reading present tense tends to ‘befuddle his mind.’

‘Past tense, combined with the traditional third person narrative, where the reader doesn’t live inside the narrator’s head the entire time, allows for more creativity with writing (in my opinion, of course). That’s not to say I don’t enjoy other points of view, but for me personally, it is much easier to comprehend and write effectively when I’m writing a tighter third-person narrative in the past tense.’

He has been told that his writing style is quite expressive, without being ‘overly flowery’.

‘I had no idea this was the case, but have had significant feedback stating this is the best part of my writing, along with the world building. I’ve never been one to ask these sorts of questions, putting oneself on the line and getting others to read my work was always daunting, but after a dozen or so people providing feedback, I guess I have to accept this may be true.’

Benjamin features strong female protagonists, ever since he first read The Ill-Made Mute by Cecilia Dart-Thornton, when he was thirteen years old. He says at this point he fell in love with writing, and not just reading.

‘At the time, there were very few fantasy books where a woman took the lead, and Dart-Thornton’s protagonist was such a strong character, I had to emulate it in a story all my own.’

In the future, Benjamin hopes that his eyesight doesn’t go on him as he ages, so that he can continue to read. ‘Audio books are fine but I would go stir-crazy if I couldn’t read character’s voices, the pacing and the emphasis on different syllables and sentences in my own head. Perhaps future proofing could be learning braille!’

Within the next few years, he would like to have a working holiday in Ireland to study the history, do some research, and keep writing his third book in his series.

‘Australians are often well-received there and I’ve done bar work in the past, which could tide me over. Fingers crossed!’

At home, he is aiming to install a floor to ceiling library to hold all of his books. Like many avid readers, he is continually running out of space, although he says, his circular rotating bookshelves have bought some time. For now! He wants to collaborate with cover artist, Nino Is, for book two and three.

‘He delivered such an amazing work of art for Beckoning of the Gate, and the process itself was exciting and eye-opening. I recommend checking his stuff out on Art Station and Instagram.’

Finally, Benjamin is considering getting a new pet.

‘Seti was my little guy, an Italian Greyhound, and the perfect breed to accommodate the duality of my life: lounging mode (when I’m writing or relaxing) and energy mode (when I’m exercising or exploring). Losing him was tough and I’ve been umming and ahhing for some time now on whether or not I can go through it all again. “It is better to have loved and lost than never to have loved at all”, or so they say. Watch this space!’