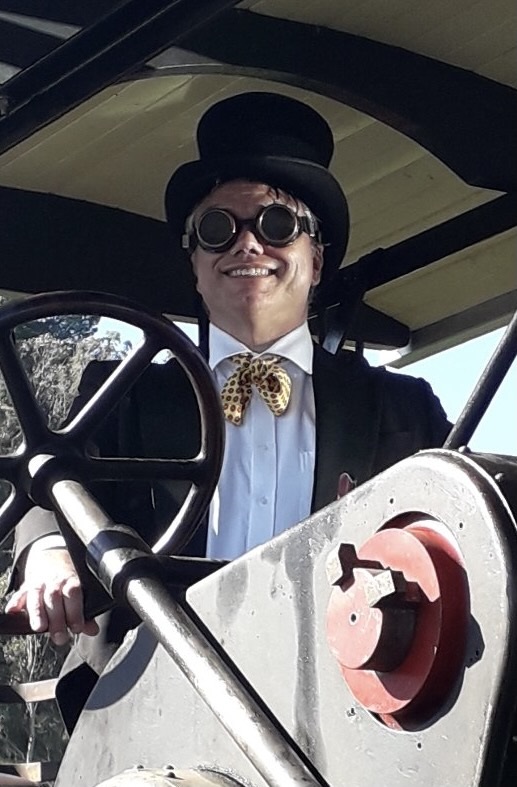 Author Ben Hilton (BG Hilton) has written both Science Fiction and Fantasy works, but says he uses the term, Speculative Fiction, because he ‘got bored a long time ago’ with arguments
about what the difference is between them!

He has a collection of images on his laptop of behind-the-scenes photos from horror movies, where you can see the Wolfman having a nap, an alien having a cup of tea and a sandwich or some extras laughing at one of Dracula’s jokes, and says, these are the kinds of worlds he loves to create.

‘It’s that mix of the very mundane and the extremely strange. A lot of what I write is humorous, though not all of it. I don’t know what it says about me that I like to sit at a laptop and write jokes to make myself laugh, but there you go.’

Ben enjoys writing flawed characters, and says that overly competent characters can be fun to watch, but he finds them boring to write. His published novel, Champagne Charlie and the Amazing Gladys, is a Steampunk adventure story.

‘I think I first came across the Steampunk aesthetic when I was a kid, watching 20,000 Leagues Beneath the Sea, First Men on the Moon, and Dr Who. I’ve always enjoyed it, but I’m too much of a historian to be uncritically fond of the Victorian era. There was a lot of awful stuff going on – although that makes for some solid story ideas.’

Ben says that he finds it difficult to stay focused. He has no real ideas about how to keep on track, other than perhaps staring an inspirational poster for a long time – perhaps a meme that says, you should be writing…

Things that do help him to keep writing, even during difficult times, include a ‘desperate need to escape from the mundane reality of life’, finding half an hour of free time to write, actually writing, coffee and sheer bloody-mindedness!

In the future, Ben hopes that we get through the pandemic and that we learn some lessons about how to prevent something like this happening in the future. He hopes more of his work is published, and says that it would be nice if one of them really took off, or got turned into a Netflix series, but he’s keeping his goals more reasonable at the moment.

He wants to be able to travel overseas again, or at least be able to go to an author event without it getting cancelled at the last moment and that his daughter has a good life.