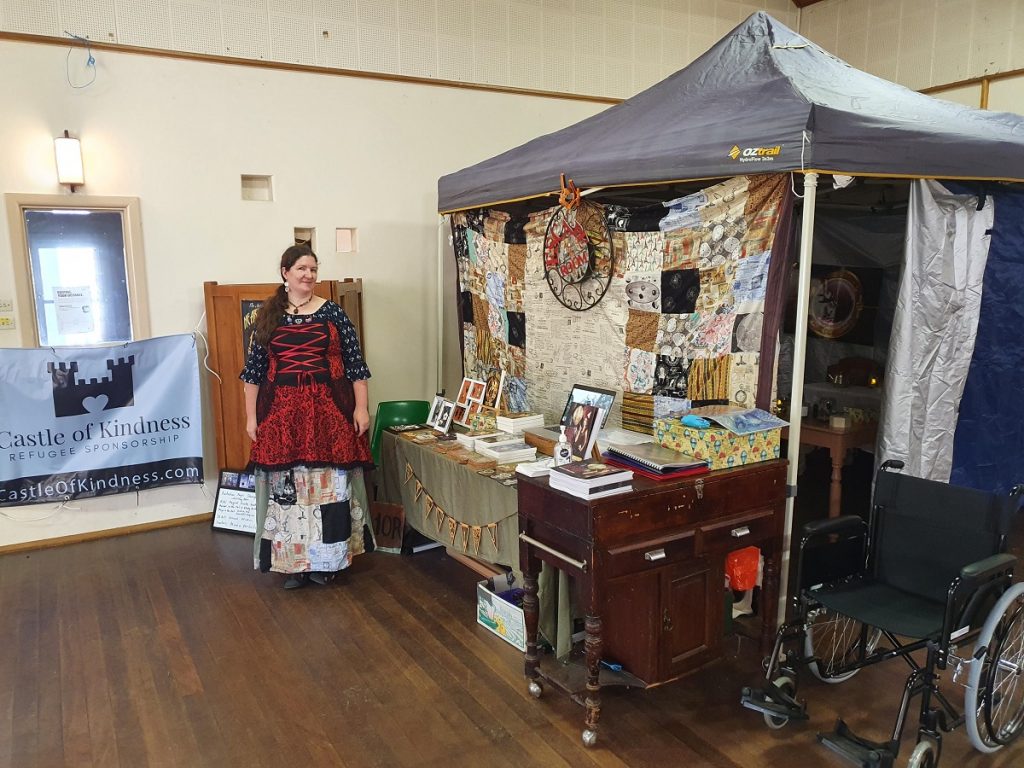 Author Felicity Banks says that almost everything she write involves magic, because she gets bored otherwise (or disturbed, if she writes crime or horror).

‘I also write steampunk, because a friend of mine did cool stuff like steampunking a teddy bear and I was slowly drawn into the whole scene. Now I own five corsets. Oh, and I’ve written a magical steampunk trilogy set in Australia.’

Felicity writes compulsively and once wrote a 50,000 word novel in three days. When she realised that she didn’t want to become a teacher, despite planning to become one for years, she lived on her savings for several months and wrote full-time. Not only did she not get sick of writing, she found it difficult to take a single day off per week.

‘I’ve tried to give up writing while travelling; after having a baby—nope. It’s too much fun to give up, ever.’

These days she writes a lot of interactive fiction, along the lines of the Choose Your Own Adventure books, but usually they are digital and sold as a phone app via a gaming company. She says it’s easier to write than regular fiction, because there are always several endings. This means that when she writes a dark ending, she feels less emotional, because it isn’t the ‘real’ one. Interactive fiction, she says, also pays better than regular fiction, and gets more readers.

Not only is she a compulsive writer, she started young, outlining a novel when she was only seven and writing her first long-form story when she was sixteen. She finally had her first novel published when she was thirty-four. It was the fifteenth novel she had written.

At home, she has two primary aged children and two calico cats.

‘An interesting fact about me is that my belly button is fake, really! I had major stomach surgery and the surgeon made a fake one because people freak out if they wake up without a belly button.’

When Felicity wrote her first steampunk novel, Heart of Brass, she developed a bisexual protagonist.

‘I was in my 30s and hadn’t realised I was bisexual myself. Right now I’m writing an interactive steampunk novel called Flight, which is set in the same universe as my novels. It was almost finished in 2018 and then I decided to add two chapters. Those two chapters have taken over two years so far.’

She wrote her middle grade fantasy, The Monster Apprentice, while staying in a backpacker in Christchurch, New Zealand.

‘They gave me a discount based on my promise to dedicate the book to them if/when it was published. Which I did. . .more than a decade later.’

Felicity is currently planning an interactive novel about becoming a cat breeder, mostly, she says, so she can live the life of a passionate cat lady without having to get divorced first.

1. At present, I’m not allowed to do any sewing (including fixing outfits I really like) until I finish Flight.

2. I bribe myself with junk food, constantly.

In the future, Felicity hopes that Australia will soon have a refugee sponsorship programme similar to the Canadian system and is part of The Community Refugee Sponsorship Initiative, formed by a group of major refugee advocacy organisations in preparation for a review of Australia’s current refugee sponsorship system. That review is happening now.

‘In the meantime, I’m running the Castle of Kindness Refugee Sponsorship Group under their guidance and training, and we are already mentoring refugees as they settle into my home town of Canberra.’

She also hopes she can make more money from her writing and says half minimum wage would be a significant improvement and that she can become a better writer.

Suffering with chronic conditions, she hopes her health improves. Not so much that she has have to give up writing and go back to a ‘normal’ job, but enough that she can look after her kids for full days without getting a migraine, panic attack, or other painful consequences from pushing herself too hard.

And finally, she hopes that her books find their audience.