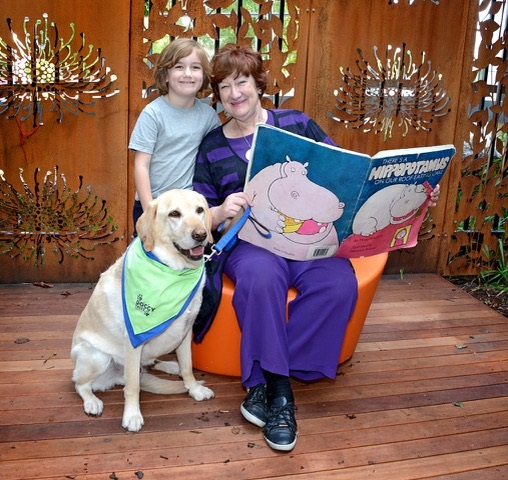 Hazel Edwards OAM is the star of my #LoveAusAuthor feature today. Her third published work is perhaps her best known, the children’s picture book classic, ‘There’s a Hippopotamus on Our Roof Eating Cake’. This special imaginary friend has been cherished by children and parents alike and led to the ‘dubious honour’ of Hazel being referred to as ‘the Hippo Lady’. I remember many nights snuggled up in bed, reading this beautiful book to all three of my boys.

Since its publication in 1980, this children’s book has been reprinted each year, evolved into a series of seven other picture books, inspired a junior chapter book, classroom play scripts, a musical stage production and a short movie. The Hippopotamus books have also been translated into Mandarin, Braille and Auslan signing for the hearing impaired and were presented as an official Australian Government gift to the children of Princess Mary of Denmark. What an adventurous and celebrated Hippo!

Today, we spend five minutes with Hazel, to get to know the person and the writer.

A readaholic, who even reads in the bath, Hazel’s husband, two adult children, their partners and four grandsons (for whom she writes a story each birthday) are all involved in her work. This ‘family trade’ includes them being ‘yawn-testers’ and ‘tech-helpers’ when her electronics die. Her children went to a Jewish school, although they are not Jewish, and her daughter Kim is a marketing director in her ‘real’ job and her son helped her with outback facts for ‘Wed then Dead on the Ghan’.

Hazel says she writes in order to live more intensively, using all of her senses. She enjoys participant observation (doing interesting stuff, like Antarctic expeditions, visiting a Mosque, hot air ballooning, or belly dancing) and then writing afterwards. She writes to share insights into others’ lives or cultures, with humour, leading to more tolerance, and to enter different worlds via settings or cultures, or interviewing personalities and learning new skills during each book.

She works with enthusiastic and ethical creators like Larrikin Puppeteers (who have just won ‘The Best Kids Live Show’ in the National Australian What’s on 4 Kids Awards). Getting beset on an Australian Antarctic Division expedition as writer to Casey Station was her most significant research ever (plus the chopper crash!). The Larrikin Puppetry production of ‘Hijabi Girl’ is her most joyful project. She loves the puppets, music and songs, and admires the hardworking puppeteers.

During COVID Hazel has revisited her backlist to adapt stories for new digital mediums, like comic graphic novels, or performance. Her interest kindled by Melbourne University’s e-book ‘Untapped Project’, this included ‘General Store’, her first YA novel, set in a country town, which was translated into Finnish.

‘This forced me to sort rights, folders etc and become more aware about how vital marketing, distribution and subject are, not just the quality of the writing. In the past, traditional ‘big’ publishers controlled marketing, but now, small, energetic, enthused mini publisher are more effective. Becoming a hybrid author with some self publishing is an apt decision for an experienced author with a big backlist,’ she says.

During Lockdowns Hazel has found work comes via personal recommendation from those with similar values on projects, which matters for the ideas involved.

‘As a ‘vintage’ author I want to use my energy effectively to make a positive contribution, hence projects like ‘Hijabi Girl’ and ‘Celebrant Sleuth’ with my asexual sleuth Quinn. ‘Like Me’ contains issues based stories for beginning readers which were written on request about handling grief (Popstar), fostering, reading dogs and asylum seekers.’

Hazel has also moved to writing adult mysteries to improve her plotting and is learning from co-script writers, such as Geoffrey Wright, as they adapt ‘Wed then Dead on The Ghan’. Always aiming to continue her development both personally and professionally, she has recently completed a Forensic Medicine and Crime Scene Investigation course, as part of her ‘learn-a-new-thing-each-year’ aim.

Five things that help Hazel to keep on writing

Five things Hazel hopes for in the future

Hazel is an Ambassador for Australia Reads:  https://australiareads.org.au/ambassadors/

Alchemy lists many of Hazel’s e books and where available.