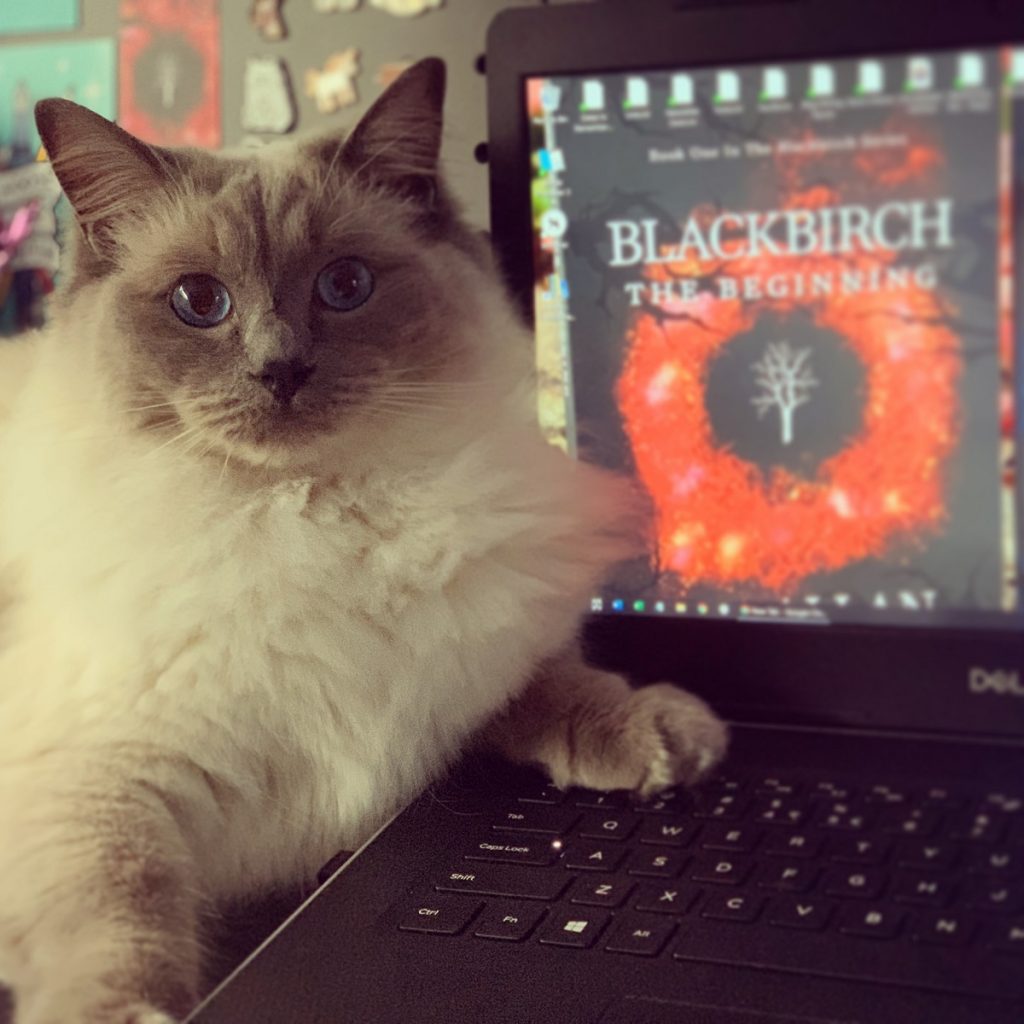 Whilst her adorable cat Dash features here (and on Twitter) and could possibly be misconstrued as the author of her books, it is actually K.M Allan who writes the YA series, Blackbirch. She says she has chosen to focus on YA, because they’re the kind of books she loves to read and YA stories made her want to be a writer.

‘There’s something about stories where the characters are in-between being kids and adults that makes things fascinating, and, a little bit heartbreaking.’

K.M writes urban fantasy stories because she likes the idea of mixing magic with real life and chooses teenagers as her main characters because they don’t have or need to have, everything figured out.

1. I am currently writing the third book in my YA Urban Fantasy series.

3. Readers will get closure to the cliffhanger ending of book 2, Blackbirch: The Dark Half.

4. There’s a return of some familiar characters and the addition of some new characters.

K.M says her first book, Blackbirch: The Beginning, was supposed to be published by a small press but six weeks before the release things went sideways and she had to learn how to self-publish very quickly. Book 2 in the series, Blackbirch: The Dark Half, is her favourite because it has many twists and turns.

‘The amulet used by the characters in The Dark Half, which is pictured on the cover, is based on a piece of my own jewellery. The series itself is based on a small town surrounded by black birch trees, which has made me a little obsessed with trees! It was a scene in book 2 that was behind the inspiration for the whole series, and it popped into my head one day when I was walking home from work.’

1. I’m an identical twin and I’m the oldest by 5 minutes (which totally counts).

2. I grew up in Sydney but now live in Melbourne and still call potato cakes scallops.

3. Although I love dogs, I currently only have a cat. He likes to sit all over my writing desk.

4. I spent nine years writing hairstyling articles and know a lot of useless information about hair colours and hair cuts.

5. My other creative outlet is taking photos, especially of animals and flowers.

In the future, K.M hopes to finally finish her YA series, which she has been working on since 2001, and to write and release a book based on the writing advice found on her blog. She hopes to have more real-life brunches with the talented writers from the #6amAusWriters group on Twitter, to procrastinate less, and to devise an effective, clever, and quick, editing process!

You can find K.M’s books on the links below and her very helpful tips on writing and being an author here on her blog