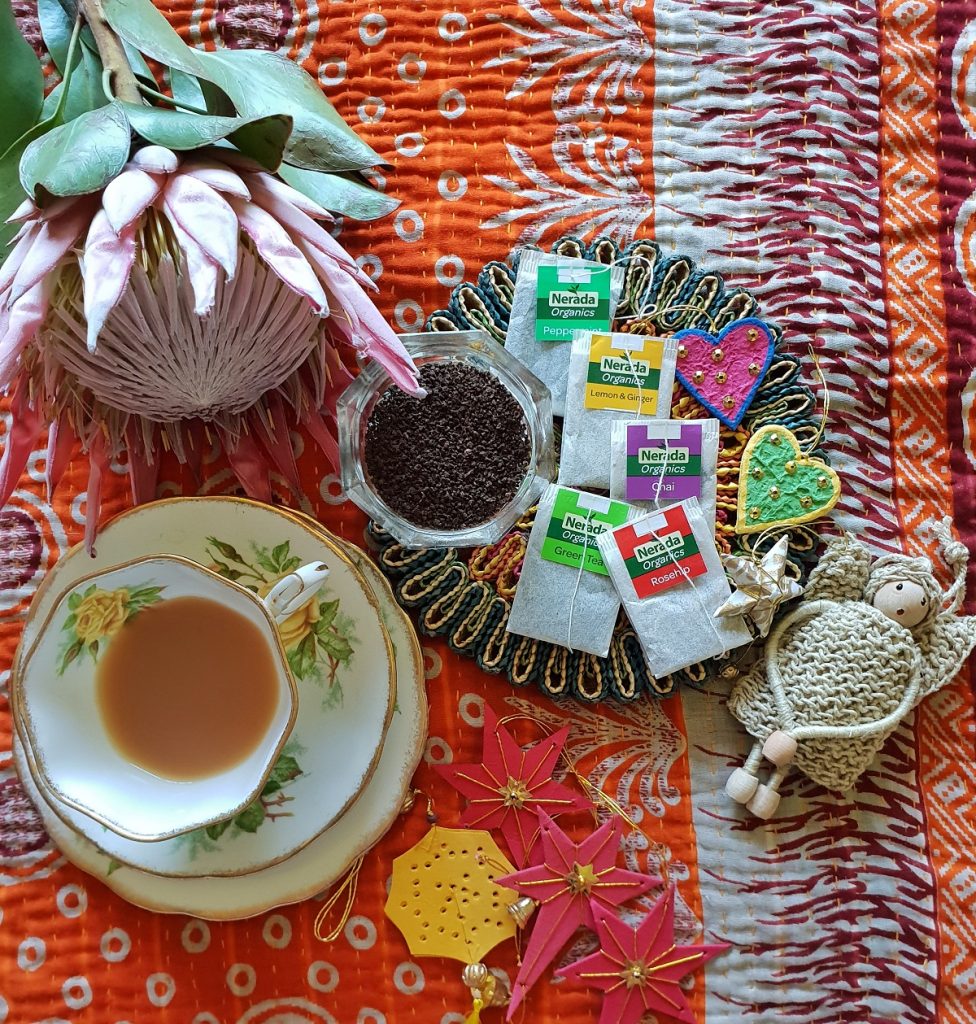 **This post is brought to you in partnership with Nerada Tea
Do you remember the first time you experienced tea? I say experienced, because a cup of tea is far more than a drink. Think about the different types of tea, the scent of the leaves, the sound of a boiling kettle, the pouring of water bubbling into your cup, the way it feels as you sip it.
If like me, you use leaves and a beautiful teapot and cup, the process is even more lovely. And if you are a true connoisseur, even the thickness of the cup will change the taste, and be important to you. I can not bear tea from a thick mug!
Read on for the history of tea and a great giveaway from Nerada Tea and The Sustainable Home Hub – Enter at the end of the post!
I can clearly remember when tea became a daily ritual for me. I grew up in a family of English migrants and tea was a part of life. As a child and teenager, I chose to drink milk with my breakfast and continued this when I left home. It was at my university placement in a social work department at a hospital, that tea became part of my life. A tea break was a must, and a milky cup of tea became my preference. Now, my tea is far darker, but I still do not like black tea without a bit of milk. Everyone is different in how they like their tea. For me, pouring the tea before the milk is essential, but I know other people who must have the milk in first – what are your tea rituals?
Tea has featured in the mundane everyday moments of my life, and the big life changing ones. A good talk with my best friends has always included popping on the kettle while we worked out the big issues of life. Tea has been shared with my mother, my grandmothers and my great grandmother. I have shared tea across the world, drinking Rooibos in South Africa on safari with my Mum, and when I travelled to England as a young child, one of my strongest memories is our family laughing at the countless number of cups of tea we were offered as we visited relative!  Tea has even brought me great comfort after the loss of loved ones, and soothed my emotions at other times in life when I have felt stress or upset.

It seems tea drinking is an important part of many people’s lives. Millions of people across the world love their cup of tea each day, and it is hard to imagine a world without tea. In fact, it has become the most widely consumed beverage on earth after water. More tea is consumed throughout the world than any other liquid, except water.
Starting in China, tea is now consumed throughout the world, in a variety of types and styles.  Legend goes that tea originated in 2737 BC when the Emperor Shen Nung of China was removed from power, and driven out to an isolated spot in Southern China. He had no money and nothing to drink except water. He demanded all drinking water be boiled as a hygienic precaution. One day he was sitting under a tree when some wind blew a few leaves into his cup of boiling water. Apparently, he loved this new drink so much that he sat under that tree for the next seven years and wouldn’t drink anything else but tea! See more on the history of tea here.

The tea industry in Australia has had a complicated history. It first began during the late 1880’s, after the Cutten brothers discovered potential farming land in Bingil Bay in Queensland. They set up Australia’s first commercial tea plantation here. Sadly, the great cyclone of 1918 and the tidal waves that followed, destroyed the entire plantation, and the estate was abandoned for many years.
During the early 1950’s things took an upward turn, after Dr Allan Maruff migrated to Australia, and settled in Innisfail, near Cairns. He noticed that the area had lots in common with his homeland of North India, where tea grew happily. He was as an enthusiastic botanist and decided to develop a tea industry in Australia, going in search of the Cutten brothers’ lost plantation. He was delighted to find hidden deep in the Queensland rainforest, a thriving tea plantation, with some tea plants as high as 15 metres! He collected hundreds of seedlings and seeds, and returned to Innisfail to begin his tea nursery.
In 1958 Maruff purchased 320 acres of land in the Nerada Valley, nestled in the foothills of the Atherton Tablelands and planted the tea seedlings collected at Bingil Bay. The tea plantation grew, as did the challenges of finding suitable labour. Marruff approached trading house Burns Philp and they formed a joint venture called Nerada Tea Estates.

By 1969, it became clear that the tea industry had to develop mechanical harvesting methods, so that tea in Australia would continue to be viable. A tea processing factory was established in 1971 and the tea was sold to packers and blenders in the southern Australian states. However, the quality of the tea was not high, and the need for very low prices put the new business under enormous financial pressure. The high production costs eventually led to the closure of the factory and plantation in 1972, with Burns Philp buying out Maruff’s holdings and selling the assets to Tea Estates of Australia (TEA).

The new group of Innisfail investors, led by local Holden dealer Rod Taylor, formed Tea Estates of Australia and decided to move away from selling bulk wholesale tea and develop a retail brand. In 1974 the Nerada Tea brand was launched into the Queensland Market through Cut Price Stores and by 1982 it was available in mainland states. This fledgling industry was still fragile, and needed support of a number of growers and investors to survive. It was a difficult journey, but one which eventually resulted in a thriving tea industry, with thanks to the Russell family. Read more here about the Nerada Russell family, who have been involved in tea since 1927, successfully growing the Australian Nerada brand we know and love today. 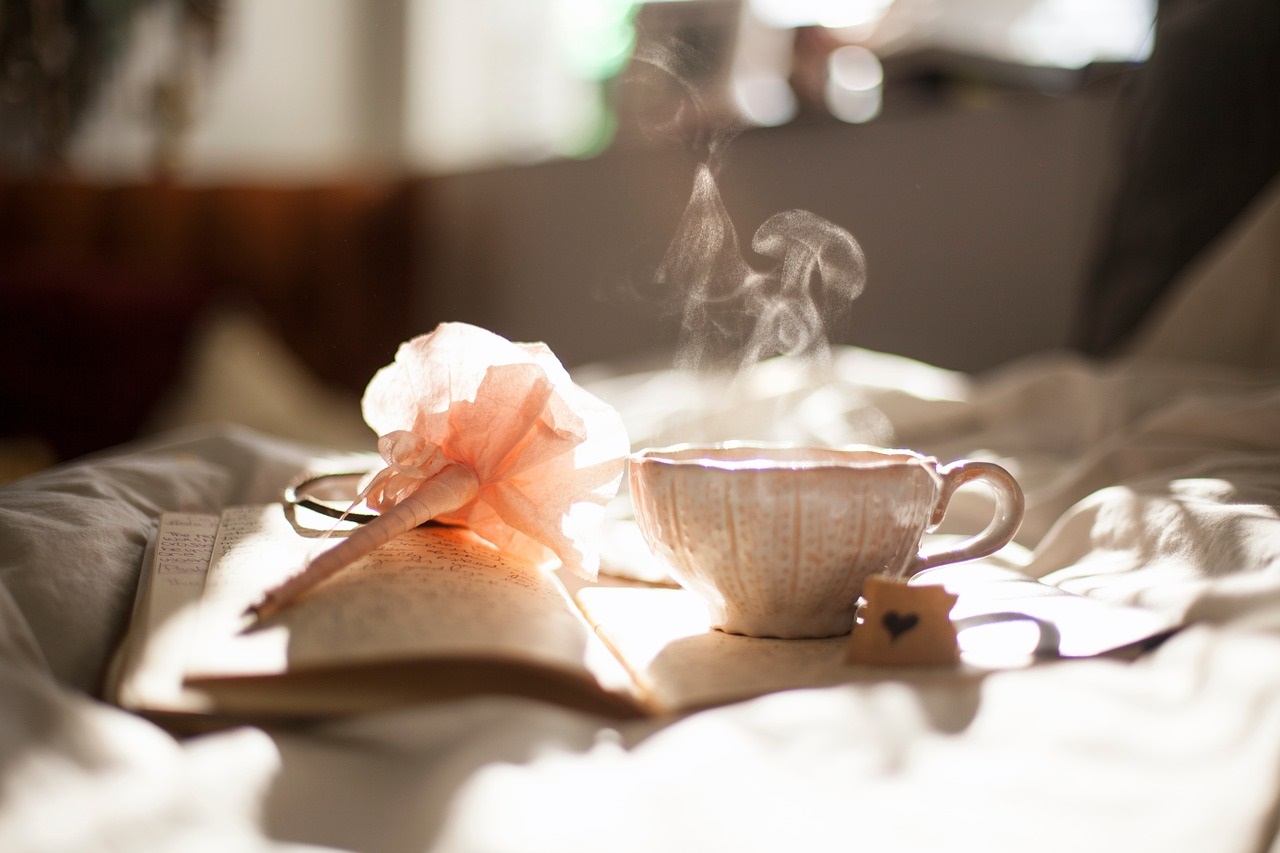 Black, green and white tea are all derived from the same plant – camellia sinensis. What makes them different is how the leaves are picked and processed, which in turn results in varying flavours depending on which tea you are drinking. Nerada produces single-origin black tea, meaning it is all grown, pesticide free, at their estate in the Atherton Tablelands in Far North Queensland. After the leaves are harvested, they are cut and torn, and left exposed to the air. They undergo a natural enzymatic oxidation, which changes the colour of the leaves from green to brown, a similar process to when an apple is cut and left out and eventually goes brown. After further drying, known as firing in the tea industry, the leaves turn black. Nerada produces a loose leaf tea (with no plastic in sight) so you can brew a big pot to enjoy with friends or for individual enjoyment.

Some teas have cleansing properties and are considered to have the potential to bring health benefits. I know that for me, peppermint and ginger teas are vital to my chronic stomach conditions. But it is the good old-fashioned black leaf tea that is my favourite.  Tea contains traces of proteins, carbohydrates, amino acids and lipids. It’s also low in sodium, and enjoyed without milk or sugar, it contains virtually no calories. Tea contains natural antioxidants called flavonoids. Antioxidants help to fight damaging free radicals and maintain healthy cells and tissues. They also contribute to promoting healthy cardiovascular function.

The use of Teabags

As a leading producer of tea in Australia, Nerada recognise the need for continued innovation and are always looking at ways to reduce their environmental footprint. Their Australian tea plantations are pesticide free, and all other products are organically grown. Recently they were the first agricultural enterprise in Australia to be awarded Rainforest Alliance Certification.

Currently, there’s very few filter grade paper options available to tea producers that can seal the tea into the bags effectively whilst allowing the tea flavours to infuse naturally. The Nerada filter paper is manufactured using a blend of high-quality manila hemp, which does contain a tiny percentage (less than 2%) of food-grade synthetic fibres. These fibres are used to heat-seal the teabag, ensuring that the tea remains inside the bag while brewing. These heat-sealable fibres do not leak into the tea during the brewing process. In fact, the use of heat-sealable fibre in teabags has met with rigorous worldwide food and safety regulations, deeming their use 100% safe for the tea drinker.

Their teabags are oxygen-whitened, which means they have not been treated with harmful chlorine or chlorine-based compounds. Not only are oxygen-whitened teabags healthier for the tea drinker, no harmful toxins enter the environment once the tea bag is discarded.

Nerada teabags are compostable when added to a normal garden compost heap (we personally place our herbal infusion teabags straight into the compost or council green bin and have never had an issue). The natural fibres of the filter paper decompose at a natural pace, while the tiny amount (less than 2%) of synthetic fibres decompose at a slower rate than their natural counterparts.

Given that the popularity of the teabag in Australia shows no sign of waning, the next stage of Nerada’s product evolution will naturally focus on the teabag, and how they can make it more environmentally sustainable. Their team is currently in the process of trialling a new filter paper made from 100% natural fibres and they intend to introduce this new filter paper to their teabags as soon as they are confident in trial results – so stay tuned.

So, you can see, there are many reasons why tea is such a popular drink around the world. To celebrate Christmas and the love of tea, Nerada and The Sustainable Home Hub have put together a simply tea-alicious giveaway!
There are THREE prizes valued at over $130 each – each pack contains:

Answers posted on social media will not be included. You must comment on this post,
Good luck!
Helen