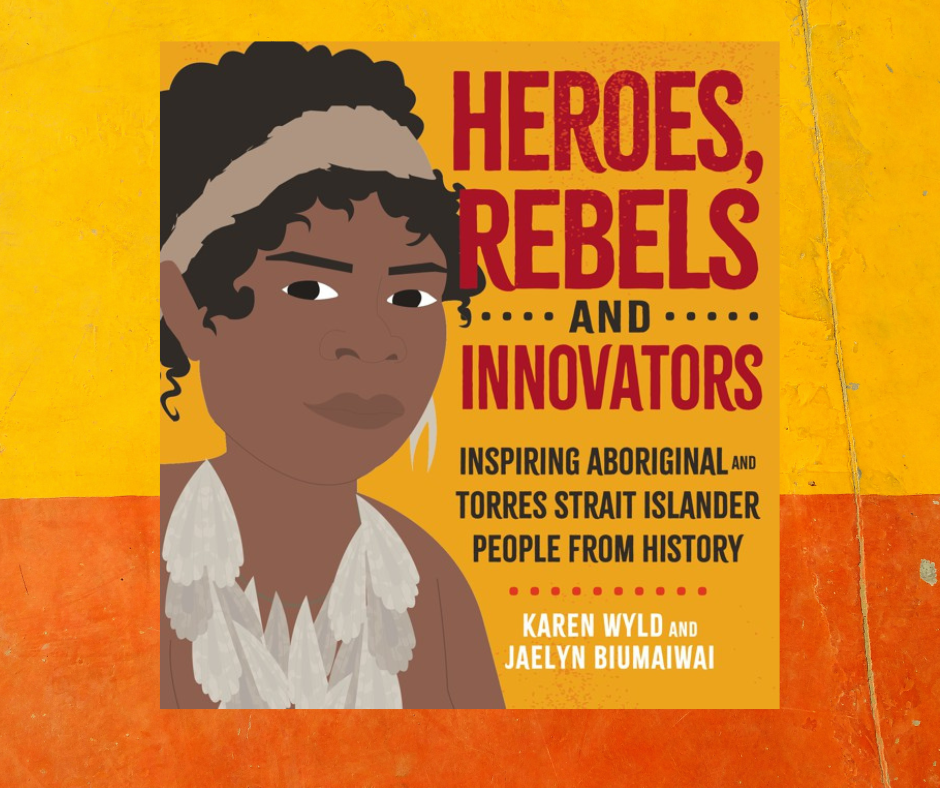 This Children’s Book Council 2022 Honours winner, Heroes, Rebels and Innovators, by Karen Wyld and illustrated by Jaelyn Biumaiwai, shares seven inspiring stories about Aboriginal and Torres Strait Islander people from history. Author Karen Wyld, a writer of Martu descent, and illustrator Jaelyn Biumaiwai, of Mununjali and Fijian descent, have created a beautiful book, that is easy to pick up and share with children and young people, and equally as fascinating for adults.

Karen and Jaelyn’s combined skills weave together these seven real-life stories of Aboriginal and Torres Strait Islander people, whose adventures, courage, determination, kindness and innovation, changed the world, but are little known, especially by white Australians. These stories highlight just a small number of the Aboriginal and Torres Strait Islander heroes, rebels and innovators, who stood fast, stood up, and held onto their dreams, in the face of invasion and settlement by the British.

Amongst the stories are:

Karen Wyld states in her notes that the process to ensure the content of this book was respectful and accurate was ‘time-consuming and often challenging,’ and that this process was carefully constructed in order to ensure the book was culturally appropriate and honoured peoples’ ancestors. The result is a complex combination of facts with lyrical storytelling, coupled with beautifully drawn illustrations that pop from the muted ochre tones of the coloured pages that reflect Australia’s oranges, browns and reds.

This book is a perfect resource for school libraries, classrooms and book clubs. It would lend itself well to a range of topics and learnings. I enjoyed all of the stories and found it a wonderful way to begin to delve into the complex histories and diversity of Aboriginal and Torres Strait Islander peoples and cultures connected to Lands across Australia.

Each of these stories is presented with two narratives – the first is a poetic and lyrical telling of the heart of each tale. This is followed with a more factual narrative, which provides a summary of the historical elements. This hardcover book is earthy in its pallete, with striking illustrations and wonderful words, which will hopefully inspire readers to continue to seek out more stories about the lives of Aboriginal and Torres Strait Islander peoples and cultures.