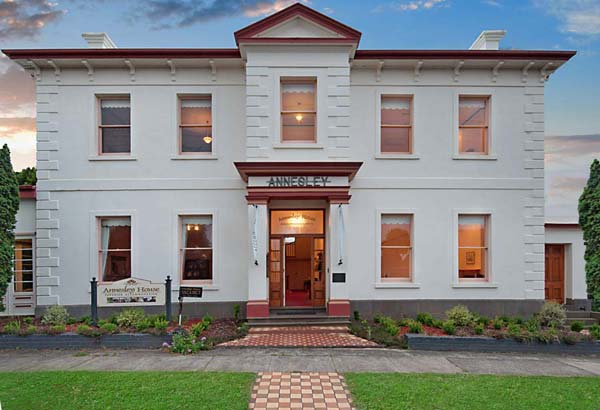 When we went on our roadtrip to Decoration and Design a few weeks back, we stayed in some fantastic places along the way. The first night was the amazing Annesley House in Portland. This 1878 2 storey building was originally a doctor’s surgery and private residence which was converted to a guest house in the early 1900’s. It has a rich history of providing the very best accommodation in Portland Victoria!  We would definitely stay there again.

Meticulously restored it to its former grandeur Annesley House consists of six serviced apartments and the Grande meeting room. Mark, the owner and his cute as a button puppy dog (who my son named Schnitzel Von Crumb of the very low tum), welcomed us and made us feel at home. Schnitzel even came and visited with us a few times! Once I talked about my blog, Mark showed me through this gorgeous building so I am sharing it with you and can highly recommend it. We only wish we had more than one night there.

The heaters were wonderful, the setting perfect, the beds comfy and warm with electric blankets, all comforts provided including gourmet biscuits, chocolate frogs for the kids, a selection of quality tea and coffee and port for an after tea nip. We felt special and looked after which is what you want after a long day on the road with kids in tow.

Portland is actually the oldest town in Victoria being established by the Henty’s in 1834 and is a wonderful portside town today.  Portland has survived and thrived through federation, two world wars and economic hardship. Like the town itself, Annesley House has witnessed changes in Victoria across three centuries and is still standing to offer you that special stay in Portland.

When Annesley House was restored, the guiding principle was simply to ‘let Annesley tell its own story.’ They wanted to combine the rich history of the mansion and the town itself  and yet provide the finest Portland accommodation on offer.  I think they have been able to do this. I had a lovely jog across the clifftops and my hubby took Maxwell for a swing in the large playground the next morning, while our 14 year old slept in 🙂

One of the fantastic things is you can make short trips around the region for whale spotting, walks and history. We had little time so popped out to the Cape Nelson lighthouse for a look and morning tea on our way out the next day. I was desperate to see whales but the whale centre had no sightings that morning. Luckily later that day in Warrnambool I saw a heap! If you have kids, the museum attached to the tourist centre is brilliant.

Boardwalk at the lighthouse

Cape Nelson lighthouse which you can do a tour of but it was a lot of steps for a 4 year old!

It was damn cold!!

We stayed in Dr Brewer’s Residence. Annesley was built in 1878 as the residence and surgery of Dr Brewer. Below is an extract from the “Portland Guardian” Sept 27, 1879.

“ TOWN IMPROVENTS…we cannot omit noticing [the accommodation] of Dr Brewer. It is one of the finest that a private gentleman in a country district need desire”.

Dr Brewer was both “Medical Officer” in charge of the local hospital and Mayor. He was born in an era when wealth was used to impress and Annesley House was constructed for this purpose. The three bedroom apartment is so lovely despite my children’s best attempts to trash it 🙂

There are a number of apartments in the accommodation. Dr Brewer had only one child, a daughter Rosalie who died without having any children. The rooms in which she lived have been remodelled into a one bedroom serviced apartment “Rosalie’s retreat”.

In the late 1800’s Portland was a busy port and business centre. A man of Dr Brewer’s station would have been called upon to ‘accommodate’ visiting captains whilst their ship was in Port. These rooms are now known as the Captain’s Quarters to reflect the eclectic tastes of sea going gentlemen of the era.

In the early 1900’s Annesley passed to the Wadmore sisters who were well known for their enterprising spirit. The Wadmore sisters quickly turned the mansion into a guesthouse offering the finest Portland accommodation. Annesley House became an instant hit with holiday makers in the Western District of Victoria. The main bedroom of the house has been remodelled into the “Honeymoon Suite”.

In the 1940’s Annesley passed to Mrs Luers (daughter of a local parliamentarian & poet) who had three great loves in life: playing the piano, the guests that passed through Annesley House and tending the beautiful gardens of the mansion. Mrs Luers was owner of Annesley until 2004 when the house was bought by the current owners. The apartment, which is draped by her beloved Baytree, has been named in her honour.

The formal sitting room, which is now known as “the Grande”, was the room in which Dr Brewer received his distinguished guests. In an era when first impressions always counted, this room was designed to amaze guests with its opulence. ‘The Grande’ is now available for hire and is ideal for small functions or meetings. If you are headed to the region I suggest you stop by and say hello to Mark and Schnitzel and snuggle up in one of the lovely apartments.

Each room has it’s own features 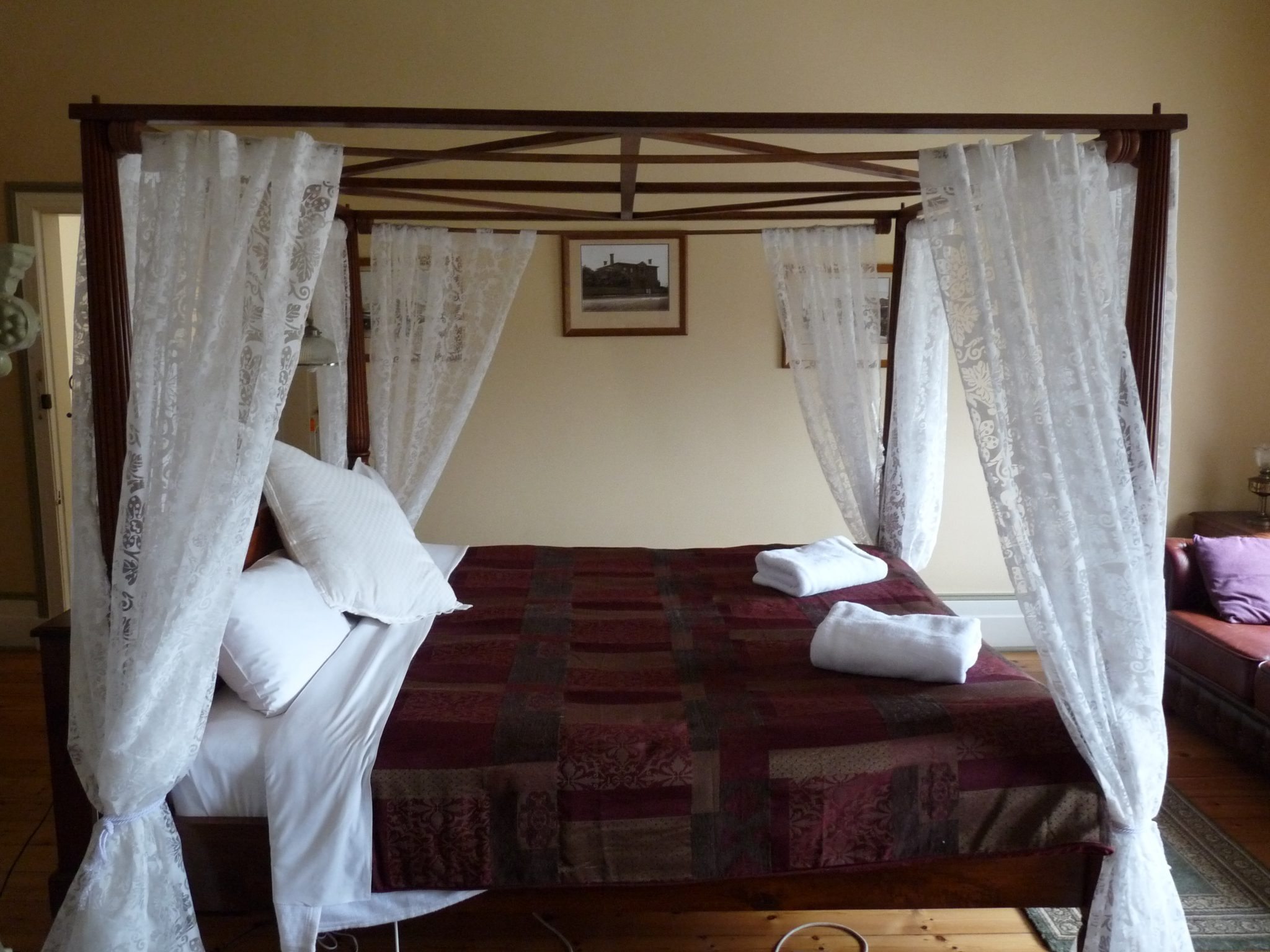 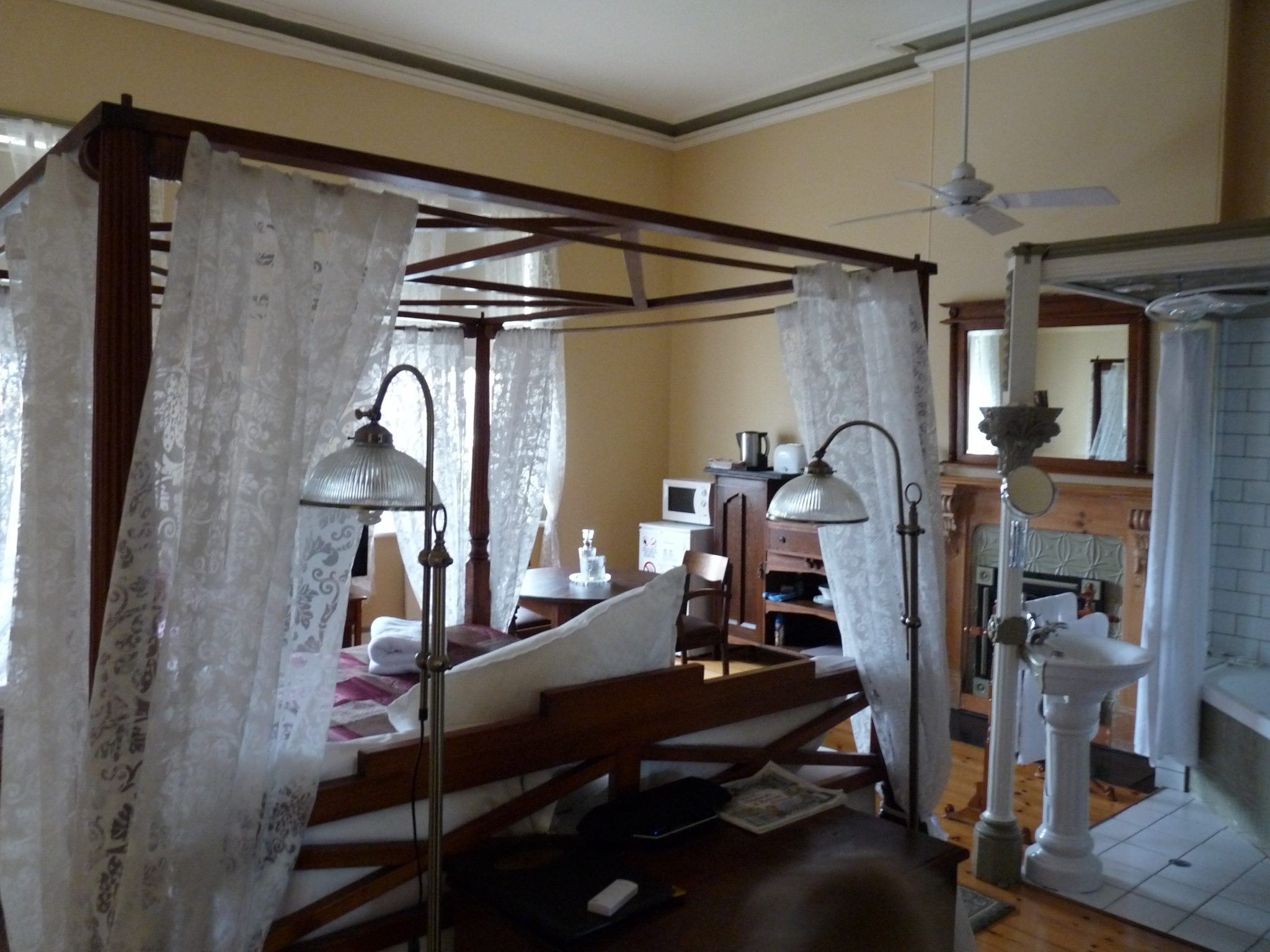