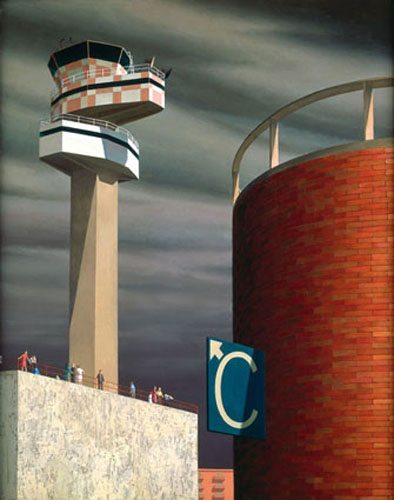 Just breaking all over social media and the airwaves is the sad news that one of Australia and the world’s greatest Artists, Jeffrey Smart, has just passed away in Italy where he lived for many years, aged 91 years old. “Master of Stillness”, Jeffrey Smart had a huge personal impact on me as a young girl and teenager and into my adulthood. Studying art in high school through to Matriculation, he was one of my sources of inspiration, along with John Olsen.

Both were landscape artists, but Jeffrey was a painter of the urban landscape, an artist of amazing ability to take an ordinary object, a scene, a moment, an angle or light and turn it into something beautiful. One of my strongest memories is of the painting “The Control Tower” and every time I land in Sydney, I look for it still. I am often taken by architecture and the line and shape, the way light falls on a building, the angles and the way the built environment sits against the natural one. Jeffrey was able to interpret this and make it sing.

I was lucky to see his exhibitions on a couple of occasions in Adelaide, the last one just recently. One thing about Jeffrey was his message to people not to take his work too seriously.  Over the years art students (me being one of them) have studied the scene below in his most famous work, The Cahill Expressway – ” a symbol of alienation in a sterile urban landscape.” It was this urban landscape which attracted me and millions of others, to his works. The ability to make a scene so real, yet surreal, at the same time. That and his use of colour, light and exquisite skill.

In 2011, he joined an elite club of million-dollar-plus painters when spirited bidding at a Melbourne auction led to Autobahn in the Black Forest II fetching $1.02 million. Despite difficult periods, Jeffrey Smart kept painting until the end. In 2011 he experienced a time when he was unable to get the motivation to pick up a brush. This must have been incredibly hard for him, as he described painting as his “meditation and prayer”.

Growing up in Adelaide, (which made me feel even more connected to him as an Adelaide girl), he lived more than half of his life in Europe but returned regularly to Australia. He first left Australia in 1949, at the age of 28, to meet up with friends in London and study at La Grand Chaumiere and the Academie Montmartre in Paris, then travelling to various destinations to paint with others. He spent most of the 1950’s back in Australia and apparently found this “stifling” yet he was able to create a media career for himself, first as an art critic for The Daily Telegraph, later on ABC radio and finally as a compere of a children’s show on ABC-TV.

Jeffrey finally left for Italy permanently in 1963, when he was 42. One of his most memorable quotes was when commenting on this move –  “When I go back [to Australia] I see immense changes, I perhaps could live there now – I don’t know, but I wouldn’t like living where the light is so high up in the sky. I would live in Melbourne or Tasmania where the light is lower, like it is here.” Where the light is lower”. What poetry and what a lovely vision that brings.

Read a wonderful Interview with Jeffrey in the Australian here and here are some of his works, there are so many, if you have never seen any, make sure you do.

At The Window Fattoria, Jeffrey Smart 1979

Waiting For The Train, Jeffrey Smart, 1970