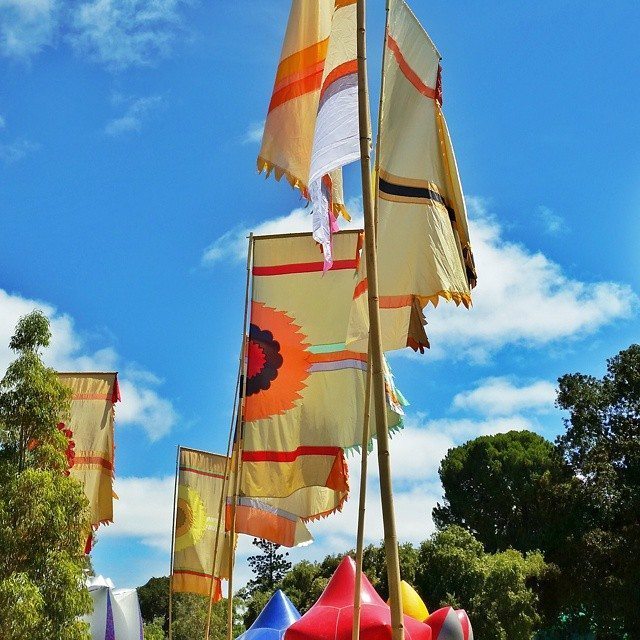 Are you a Womadelaide fan? As annual passionate WOMAD event goers since it started in 1992, our little family are so excited about this year’s 25th anniversary event! The WOMADelaide Foundation has had the privilege of hiring Botanic Park from the Botanic Gardens of Adelaide since it began, which purchased the land for the park in 1866. The Park is a magnificent 34-hectare arboretum of several hundred trees, some of which are over a century old, vast lawns and endangered flora.
One of the best parts about the weekend, is the sense of community, and people of all ages gathering under those spectacular trees. Mr Recycled and I actually got married under those very trees, and the park holds a very special place in our hearts. WOMADelaide takes great pride in doing as much as possible to protect the Park (extreme weather conditions notwithstanding) and to return it back to the Gardens in near-perfect condition. In 2013, WOMADelaide was proudly the Winner of the Partnerships Project in the Premier’s Natural Resources Management Award for their relationship with Greening Australia.

You will notice as you move around the park, order food and drinks, and use the waste bins provided for various types of waste, that this is also an event that has sustainable waste management as an important part of the festival’s operating considerations. WOMADelaide’s waste management programme is coordinated by Adelaide Green Clean, market leaders in the delivery of high quality and environmentally sustainable cleaning and waste management. Working in partnership with SITA and Jeffries, Adelaide Green Clean provides a ‘zero waste’ solution to WOMADelaide by diverting waste away from landfill and into a sustainable pathway.
Only compostable and recyclable wastes are produced by festival goers. No single use plastics here! All cups, plates, crockery, serviettes and any items sold in packaging at WOMADelaide are fully compostable and segmented recycling and organic waste bins will be present throughout the park, so if you are there, please look for the correct bins and use them properly. All organic waste generated at WOMADelaide is mulched by Jeffries, treated for composting and delivered back to and used by the Botanic Gardens. Jeffries provides this mulch free of charge.
Importantly, Adelaide Green Clean are also helping to educate the WOMADelaide volunteer Green Team on the waste management pathways and reclamation efforts with guided tours of their processing facilities. The Green Team will then be on hand throughout the festival to help educate and direct patrons on WOMADelaide’s waste streams and recycling efforts. You can locate them across the park and ask for help if something is unclear.

The ecological footprint of the weekend of events is also considered. Australia’s largest environmental organisation, Greening Australia works with WOMADelaide to offset the ecological footprint of the festival, with $2 from every WOMADelaide ticket purchased invested in native biodiverse tree plantings.
Greening Australia with the support of Canopy, has been growing the WOMADelaide Forest on land in regional South Australia, around 5km from Langhorne Creek, near the Coorong and Lower Lakes. The WOMADelaide Forest is home to many rare and threatened bird species including the Hooded Robin and Diamond Firetail. In 2008, 17 species of bird were recorded and by 2014 this number had grown to 70 species. More than 70,000 native trees have been planted across 65 hectares, offsetting to date 16,250 tonnes of carbon emissions.
The plantings include species of:
• Golden Wattle (Acacia pycnantha)
• Wallowa (Acacia calamifolia)
• Sticky Hopbush (Dodonaea viscosa ssp. spatulata)

All species chosen are local provenance stock grown using locally sourced seed ensuring the genetic diversity of the site is maintained. Greening Australia provides ongoing management of the site to ensure the plants are maintained, and replacing any failing seedlings ensures the carbon offset is secure.
All plantings and revegetation use locally collected seed from remnant native mallee vegetation, thereby building biodiversity in the region. Planting is undertaken in accordance with the Interim Australian Standards for Carbon Accounting for Greenhouse Sinks – Afforestation and Reforestation AS 4978. Greening Australia’s plantings for this project are Kyoto Protocol compliant and are registered on the land title, further ensuring that the carbon offset will be permanently secure.
This site is located approximately 5 km from Langhorne Creek in the Coorong and Lower Lakes region of South Australia on private property. The property has previously been utilised for farming practices.
Ferries-McDonald Conservation Park is approximately 5 km to the north-east while the Bremer River flows into Lake Alexandrina 14.5 km to the south. The site will act as a ‘stepping-stone’ between Ferries-McDonald Conservation Park and the Bremer River, providing a bush corridor for native fauna and flora species.

This year the Planet Talks speaker program once again provides some of the world’s great minds in a series of fascinating live conversations about our environment and sustainable relationship with the planet.
Highlights this year for waste minimization and sustainability include Sir Tim Smit, the co-founder and CEO of iFixit, Kyle Wiens, ‘The Rogue Ginger’, Erin Rhoads and ‘Be An Unf**ker’, Vanessa Morrish.
Sir Tim Smit is best known for his achievements in Cornwall, restoring the Lost Gardens of Heligan and as Executive Vice-Chairman, and Co-founder of the multi Award winning Eden Project. Opening to the public in 2000, Eden has seen over 16 million people visit its world-class horticulture and startling architecture. Tim is currently leading a project to raise money to build a geothermal power plant on the Eden Project site that will create energy for the Eden project and the surrounding community –
Through iFixIt, Kyle Wiens is taking over and helping everyone around the world repair their own products, saving millions of dollars and waste, improving the environment and competing with some of the biggest electronic heavyweights in the world. Described as the Bernie Sanders of the electronics industry, Kyle aims to reduce unnecessary e-waste and make our electronics last longer.
Erin Rhoads Tips on a Waste Free Life With The Rogue Gingeris the curious lady behind Australia’s best known zero waste blog, The Rogue Ginger. She writes about her attempts to live a plastic free and zero waste life, sharing plastic free alternatives to shopping, cooking, makeup, fashion, cleaning and travel while trying to create no rubbish. In 2015, Erin hit 2 years of being plastic free.
Vanessa is the co-founder of Be An Unf**ker – a movement dedicated to rethinking the way we talk about being ‘green’. For many, climate change and eco awareness seems too hard and overwhelming. So they do nothing. That’s why The Unf**kers start by asking people to change just one thing.

WOMADelaide are proud to be working with SunTrix to provide a solar powered festoon lighting solution for festival goers this year. SunTrix are an award winning, South Australian owned company that operate nationally. SunTrix specialise in solar PV and LED lighting and provide solar systems and complimentary products for homes and businesses.

WOMADelaide encourages patrons attending the event to ride a bike. The festival offers staffed bike parks at each of the main entrances to accommodate more than 700 bikes.

Don’t Park Your Butt in the Park!

In keeping with the South Australian Government health regulations introduced on 1 July 2016 which ban smoking from all outdoor dining areas, WOMADelaide will be a smoke-free event as of 2017. Festival goers wishing to smoke will be able to do so in 2 designated smoking areas near the Frome and Hackney Road entrances. Please ensure you dispose of your cigarette butts appropriately in the butt bins provided by KESAB in these areas.

Help Us Look After The Park

The Recycled Interiors team will be there across the weekend and will be sharing instagram and Facebook posts, as well as some Instagram stories so stay tune for that!
Maybe we will see you there!
Helen xx