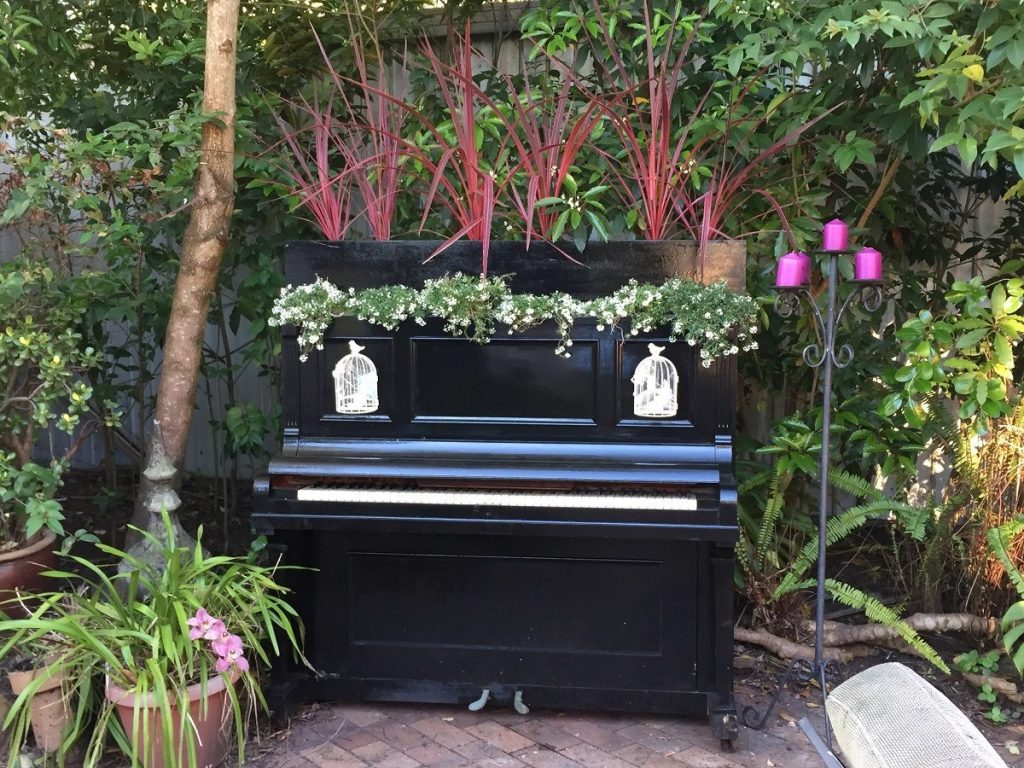 I get very excited when someone sends me an amazing upcycled project! This is a cracker guest post from one of our community, Liz. She said a friend of hers needed to “clear out her crap because that’s what you do when you move. It’s liberating”. Amongst her various collectibles, said friend had a piano that had been sitting in her carport for nearly 20 years. It was old, dirty, falling apart and Liz is sure it had things living inside it.

How to upcycle a piano into a garden planter – by Liz

She asked me what she should do with it given it hadn’t sold on Gumtree. Now anyone who knows me will be aware that I tend to be brutally honest and can often think after I’ve spoken. My response was “the only thing I would do with it is stick it in the garden”…and just like that was how it became that I had unknowingly committed.

Now this is an unusual thing, I appreciate that, but I have NEVER been afraid of being a little different (I prefer the term ‘unique’). So then it happened. I received a call months later, to say that the piano was actually coming over. Sure enough, it arrived. Children were horrified! Completely horrified. Boy, well he was hesitantly on board after he had seen the piano once but he tried to be supportive of the vision I had. Girl (that’s me) I ignored everyone’s negative thoughts and comments and stayed in my own little world thinking about how it would look.

I don’t know whether you have ever tried to move a piano, but I can tell you, they aren’t light and old ones, well they have dodgy wheels that don’t move, so this further complicated it all. I am a fairly determined person once I have made my mind up but I needed every inch of my 5 foot 3 (and a half) inches to even nudge this baby slightly.

So I removed the loose bits, cleaned it, undercoated and enamel painted it (totally love gloss black at the moment but that is an entirely different story). Then I had to add a shelf for the pots to sit (self watering of course because who has time to water these days?) and an added planter topper because it looked a little odd, (again I appreciate that it is already odd but this was a design balance thing) add in the plants and ‘Presto!’ A day or so later allowing for drying time with not a great deal of effort or skill, I present to you one completely out of tune Garden Piano!

Feel free to share your thoughts but understand that I don’t really care for negative criticism because I’m kind of stuck with this piece now…besides…it adds a little class to the neighbourhood when the kids venture outside to play it 🙂
Well I LOVE it Liz!! Do you have a project to share? Drop us a line!
Helen
xx
Originally posted in 2015